You are here: Home / Fiction / Thriller / When a Stranger Comes… by Karen S. Bell 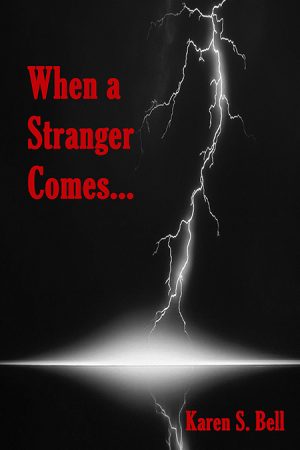 Satisfying one’s greed can come at a devilishly high cost.

Achieving what you crave can also bring the terrifying fear of losing it. For Alexa Wainwright, this truth has become her nightmare. Born Gladys Lipschitz, the daughter of an unwed Soviet-era Jewish immigrant, her debut novel, A Foregone Conclusion, soared to number one on the bestseller’s list and became an international sensation. The accompanying fame and riches were beyond her expectations. Unfortunately, her subsequent work has yet to achieve the same reception by critics and readers. Yes, they have sold well based on her name recognition, but she dreads the possibility of becoming a mid-list author forgotten and ignored. She vows to do whatever it takes to attain the heady ego-stroking success of her debut. But is she really?
Witnessing an out-of-the-blue lightning bolt whose giant tendrils spread over the blue sky and city streets below her loft window, Alexa doesn’t realize just how this vow will be tested as she’s magically transported to an alternate reality. In this universe, the characters from her books are given the breath of life and she meets publisher, King Blakemore, who just might be the Devil himself. At first, she shrugs off her doubts about this peculiar publisher and very lucrative book deal offer because the temptation of riches and refound fame is too strong. But all too soon, Alexa realizes she’s trapped in an underworld of evil from which she desperately wants to escape. For starters, she finds herself in an iron-clad book contract that changes its wording whenever she thinks of a loophole. Desperate to get her life back, she devises schemes to untether herself from this hellish existence. She’s also aided by the forces for good who attempt to help her. However, King Blakemore is cleverer and more powerful than she can begin to understand. Playfully, he decides to give Alexa a second chance to save herself from eternity with him and to be free. He offers her the prospect of a rewrite, as most authors do as part of the writing process. Given this chance, will Alexa make the same choices and the same mistakes again?

Alexa, as the MC, is relatable, likable, and vulnerable with a keen sense of humor. Her world is very small because writing is her life and so she is an easy target for entrapment. Her pact with the Devil is an allegory for the evil lurking in our midst. The social decay of modern society with its excessive greed, the ignorance of our political leaders, and our indifference toward the survival of all species from the effects of climate change, among other environmental pressures, are perhaps brought forth by the darkest forces of human nature. When a Stranger Comes… is a fast-paced psychological/magical realism/paranormal thriller.

Link To When a Stranger Comes… On Amazon Kindle Unlimited

What Inspired You to Write Your Book?
The current state of society and the idea of what it would feel like of being a successful author that is still striving to retain her success.

How Did You Come up With Your Characters?
Aspects of my personality, popular culture, the ether.

Author Bio:
When a Stranger Comes…is my third novel. My debut, Walking with Elephants, was initially published by a small publisher who went out of business. Subsequently, I took over as an indie publisher. It went on to win the Awesome Indies Seal of Excellence and was a top-five finalist in the Kindle Book Review’s 2012 contest for the best indie books. Sunspots, my second novel, was awarded the IndiePENdents.org Seal of Approval for good writing. I hold a Master of Science in Mass Communication and for 15 years, I was an editor/copyeditor for a "Big Four" public accounting firm. I was also technical editor for an accounting industry magazine.

Link To When a Stranger Comes… On Amazon Kindle Unlimited