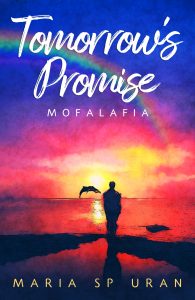 Femi is a spoiled rich Prince who likes to have fun with his friends. Unlike his elder brother, Prince Timmy, Femi uses his power to belittle and hurt innocent people for his gratification. One day, his boat was cast away to a deserted island.

There, he met ordinary villagers who led simple and peaceful lives. However, Femi struggled to live among them. Out of arrogance, he lost a bet to the jewel of the village, Becky. His forfeit was that he had to be her save for one month. During this four-week period, their closeness made Femi realise his love for Becky, but Becky is a strong-minded girl who does not tolerate being dominated by anyone. Would Femi be brave and worthy enough to win Becky’s heart?
After one year on the island, Femi heard that his parents were very ill and were searching for him. Would he be strong enough to return to his kingdom and face his past?

This book is written by a mother to her son and all his classmates, who she considered her own children. It serves to remind them that whenever they face the darkness in life, they need to be strong. The image of the dolphin on the cover symbolises intelligence and wisdom. This book aims to encourage them to use both of those virtues in their life’s journey.