You are here: Home / Fiction / Romance / Rules of Payne by Elizabeth Lynx 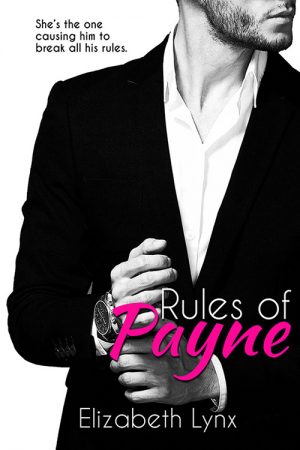 Executive Henrik Payne is used to women following his rules. When his new assistant shows him life isn’t all about rules can he learn to break them?
Morgana Drake’s boss is short-tempered, self-centered, in dire need of a social life, probably an undiagnosed workaholic, and practically unbearable. Yet, she wants to slather him in vanilla buttercream frosting and lick it off him from head to toe, and especially in between. Will she manage to keep her fantasies in check without getting fired, again?

Link To Rules of Payne On Amazon Kindle Unlimited

What Inspired You to Write Your Book?
I wanted to challenge myself to make an unlikable character, likable. That behind every brick wall built around someone's life, is a vulnerable heart wanting to be loved. I feel I achieved that with Henrik Payne.
He's the typical gruff, hard working boss but there's more to him than his perfectly tailored suit and cold, impeccably styled penthouse.
I felt Henrik needed light and happiness in his life. That came in the form of his new assistant, Morgana Drake. She was a blast to write because what's ever on her mind she will blurt out, no matter how inappropriate.

How Did You Come up With Your Characters?
They just popped into my head one day. I first started with a character blog on my website which inspired the book.

Book Excerpt/Sample
Once I was out of the elevator, I headed straight into the bathroom and noticed Ms. Drake was not at her desk. Maybe she went home for the day and I won’t have to deal with her.
I checked my watch and noted the time, ten minutes until eleven o’clock. I had just enough time to give my cock a good spanking before Ken Brooks, the CFO, used the restroom for his daily shit storm. I’m sure Ms. Drake had learned by now to stay away from her desk when Brooks used the bathroom.
My orgasm was quick due to the use of one of my top fantasies about Ms. Drake. I had about ten different fantasy scenarios of her I used when I masturbated, and they were ranked by length of orgasm and time it took to hit the big O.
The one I used was ranked at number two. I would have used the first one knowing time was limited with Brooks nearing, but I wanted to switch it up. Anyways, I used number one in the shower this morning.
Number two was Morgana on her knees in my office, begging for my cock. She drooled as I told her to take all of it. I knew she wouldn’t actually drool in real life, but it’s my fantasy. In my imagination, she salivated all over the Captain.
I cleaned up, flushed, and then ran into Brooks just as I was washing my hands. He was boring as usual. He always discussed the weather. It’s cold. Bitterly cold. Chicago in the winter was frigid, everyone knew that. Why talk about it? He mentioned the sun and I didn’t care.
Once I was in my office, I opened my laptop and began checking my emails. One was marked urgent about the new Denton account. I realized I was going to need Ms. Drake to help me.
Having just orgasmed, being in the same room as Ms. Drake shouldn’t cause any problems. I got up and opened the door to find her with her head on her desk.
“Ms. Drake.”
She popped up and stared at me. Those greenish eyes turned golden as they enlarged.
Here I was boasting about what a hard worker she was, and now she’s laying down on the job.
“Is this how you spend your day when you think I am not in the office? Just lying around.”
She opened and closed her mouth a few times before finally shaking her head at me.
“The meetings for today got canceled, so it looks like I’m going to be here the rest of the day. Come inside my office; I need to go over some things with you.”
She mumbled something just as I turned to go back inside. The words ‘come’ and ‘bathroom’ were the only ones I caught.
I turned back. “What did you say?”
Her eyes darted around. “Uh, let me just run to the bathroom first.”
I nodded my head. “Okay.”
After a few minutes, she strolled into my office. Over the last few weeks, I had become accustomed to Ms. Drake’s stride. It’s average but with a little more swing in her hips and at times, bouncy. Perhaps that was why she tripped more often than others.
But right now her walk was cat-like, stealthy, with a heaping dose of confidence and cleavage. As she took her seat, her fingers tugged at her blouse, bringing my eyes down to her chest where they remained.
I hated it when she did that.
Forcing my gaze back to her face I wondered what I missed. Something was happening and I wondered for a moment if it involved me.
“Are you feeling alright, Ms. Drake? You look pale and you have a funny expression on your face.”
Her fingers continued to fondle her top but her eyes narrowed at me. “Oh I’m fine, Mr. Payne. One hundred percent, grade-A beef, fine. In fact, I think I’m a little hot. Do I look hot to you, Mr. Payne?”
One button. Pop.
Another button. Pop.
She shimmied slightly but enough to reveal a slip of green lace.
I swallowed. Hard.
“Ms. Drake, what are you doing?”
Her lips curved as if she was waiting for those exact words to tumble out of my mouth. I got the feeling she wanted something. I also got the feeling I would give it to her. My hand slipped to my lap as I adjusted my cock already stirring from his earlier binge.
He was insatiable.
“I was in the bathroom a little while ago.”
I nodded. “I know you asked to use it before we had this meeting.”
Did I drop something in there? Maybe she heard me talking to Brooks and wants in on that top-secret conversation about the sunny sky in winter.
I tried to hide my laughter.
“No, before.”
What was she talking about? This woman was sexy and smart, but right now she might as well have been…wait, I think I got her meaning.
“The women’s bathroom you mean, right, Ms. Drake?” My eyes pleaded with her to open her mouth and say ‘yes, the women’s bathroom.' Why would she not use the women’s restroom? That would be ridiculous, especially so close to Brooks’ time.
Her head turned slowly from side to side in a tormenting no. “No, the men’s. The woman’s restroom was being cleaned so I had to use the men’s. You know, the one where you wanted me to take all of your cock.”

Author Bio:
Elizabeth Lynx writes romantic comedy with steam. She's a recovering comedian. Wife and mother of the male species. Believer in love & laughter. Her life consists of preventing small catastrophes and wondering if a day will exist when she doesn't have to fold laundry.

Link To Rules of Payne On Amazon Kindle Unlimited