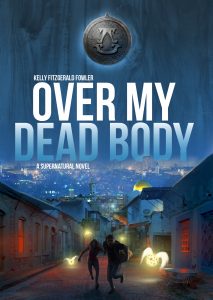 About Over My Dead Body: A Supernatural Novel by Kelly Fitzgerald Fowler

**Limited Time Discount from February 11-18th**
A mysterious estate. A collector on a mission. Will one man’s discovery change Christian history forever?
Joel Cohen has inherited a heavy burden. Still grieving his father’s death, the antique dealer examines the strange box his embittered patriarch left behind. As he pries further, Joel is stunned to discover first-hand records of the death of Jesus.

Falling further down the rabbit hole, the collector and his wife uncover a trail of historical espionage from Roman times and World War II all the way through the modern day. But as they shine more light onto their powerful artifact, they may be forced into battle against a secretive group of fallen angels…

Will Joel survive exposing a world-altering secret or will vicious demons bury both him and the past?

Over My Dead Body is an exhilarating supernatural thriller. If you like ancient prophecies, biblical mysteries, and page-turning action, then you'll love Kelly Fitzgerald Fowler's epic adventure.

Buy Over My Dead Body to lift the lid on the world's greatest mystery today!

This Christian Focused book is available in these Formats: eBook, Print, Audiobook