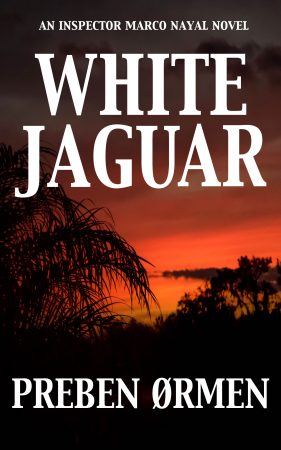 When the founder of a young nanotechnology startup company in Merida turns up floating face down in the mangroves on Yucatan’s north coast and the company’s revolutionary product prototype is discovered missing, Inspector Marco Nayal of Mexico’s Federal Police finds himself entangled in a deepening murder mystery where nothing is what it seems.

As body count and suspense build and lead after lead takes him down one empty trail after the other, Marco finds himself up against the Comisario, his results hungry and politically oversensitive boss, a hostile US company, a Guatemalan Kaibil Special Forces deserter and an unidentified, mysterious and lethal third party.

Secretly straddling two cultures, Marco is connected with the wayib, the dreaming place, the hidden world of the Mayan shamans and Sak Balam, his spirit guide, through rituals and insights taught him by his shaman father and his old ah’men mentor, the elusive Don José.

Wondering why somebody kills this many people over rice and beans, Marco suddenly realizes that the prototype is not what they are told. But when he discovers the terrifying truth, Marco must battle foreign assassins and a nano-tech weapon with a deadly payload in the fight of his life.

What Inspired You to Write Your Book?
I like the mystery-suspense-thriller genre so that was an easy choice.

Since I now live in Mexico, the location and extended setting for the novel was also easy.

I have noticed that there are very few books in this genre set in Mexico and therefore I thought I could make a unique contribution by creating a Mexican police detective.

Mexico has some challenges as a nation in the law and order department. On the other hand, most developed countries went through a similar process, but we forget what law enforcement had to deal with. I thought it would be interesting to learn more about how the police force is dealing with the specific challenges facing Mexico.

That said, I am first and foremost trying to tell engaging stories for readers who enjoy mysteries, suspense stories, and thrillers.

How Did You Come up With Your Characters?
I live in the state of Yucatan on the Gulf Coast. Yucatan has a very strong Mayan culture so I felt it would only be right to make that an integral part of the characters I chose.

The conflict between the 'Mexican' and the Mayan culture will allow me to explore various forms of tension for dramatic effect. It also lets me delve into the more mystical aspects of Mayan culture: the ah'men, the shamans, for example.

Mexico is a country in rapid development so I needed characters of both genders and of varying ages. The Mexican jurisdictional reform has far-reaching consequences for its citizens and the law enforcement agencies.

Because of this dramatic change in law enforcement, I needed characters that would span the change. The specific change and how it affects day to day law enforcement is fascinating in its own right, but is also a gift to a storyteller: there's lots of conflict and tension to be explored here.

It is impossible to deal with Mexican law enforcement without considering the role of the military, the Army and the Marina (the Navy). When I saw that one of the past law enforcement reorganizations rolled a complete brigade of military police into the civilian police force, I knew instantly what my main character's background had to be: ex-MP. I had no choice – he inserted himself into my story world. Done deal; no backing out. Realy quite funny.

The rest of the team rolled in more or less by themselves, too, as I was trying to get characters who represented Yucatan.

Book Excerpt/Sample
Marco's eyes opened in the dark and out of focus in momentary disorientation from deep sleep interrupted. That rooster two houses over never learned how to tell time; no crowing before sun-up, but no, not this one.

Suddenly aware of something else, of sounds from the door despite the hour, he rolled over in his hamaca, his hammock, the only comfortable place to sleep in the infernal Merida summer heat and swung his feet to floor tiles not cooled much by the hot still night almost passed.

He recognized the voice outside now before pulling open the door, dog barking somewhere.

Nobody knew exactly how old he was. The man of forever they said. He had just always been there they said. As long as they could remember they said, which was a pretty long time, Marco thought.

"A usted Marco, to you, too. Your father sends his greetings and this package. Here."

"How is the old sorcerer?"

"Your father is well, only a small inconvenience soon cured, we are sure. He would have come, but not this year."

As always, he saw, with a twinge in his stomach, the disappointment unsuccessfully disguised in Don José's dark eyes. Come home, it said, we didn't teach you for this what you have become, Marco, come home.

"Never anything more than a small inconvenience to him. And you, Don José, you are well?"

But Don José was not to be deflected from his mission.

"Do you speak with your way, Marco, or are you neglecting Sak Balam, your spirit guide, again? Nourish your gift, Marco, for your father, if not for yourself. That is all I have to say. I go now to collect the herbs of the season. It is time. Goodbye, que te vaya bien, Marco, be well."

With that the old man turned, striding softly on his old huaraches and disappeared quietly into the streets of the early morning.

Marco thought not for the first time about the uncanny way Don José kept appearing unannounced with slim news, cutting admonitions and a supply of the herbs and other substances used for centuries by Maya shamans. All collected by his father, Don José and others in the close-knit ah'men community on a schedule and to rituals known only to the initiated.

Standing there on his doorstep in the lingering night smells of his city, his mind imagined the route Don José was taking on his annual trip. All on foot, too, well mostly, except for a free ride here and there, past, to him, badlands or empty spaces where nothing even remotely interesting existed. Like large towns and cities. They were to be endured, but not much else.

Sun rays broke his doorway reverie, touching his face over the rooftops with the first heat of a summer's day. Closing the front door quietly behind him, he ambled to the kitchen, opened the left cupboard above the sink to deposit the yellow bundle next to a stone mortar, a container of empty gelatin capsules, a small pill maker, a funnel and two small glass jars, one with red capsules, one with small, round grey-green pills.

His health food, he would say if anyone asked. All natural herbal supplements, he would say. Just a little Mayan spiced. Although that last he would not say, being, as it were, his secret to clear and present thinking, to solving. Two plus one in the morning with some water.

Morning ritual complete, the urge of breakfast came, saw and lost, not uncommonly, to an empty fridge. He would make a stop on the way to the station.

Author Bio:
Preben Ormen was born in 1953 outside of Oslo, Norway where he spent his first seven years in a small seaside community after which the family moved to the north end of Oslo proper.

After high school, he completed his national military service in the Royal Norwegian Artillery where he trained as a communication platoon leader in a motorized artillery battery attaining the rank of sergeant. He then went to Canada for a BA in business administration and later, an MBA.

His work career in Norway, Canada and Mexico, spanned two stints in public accounting, one in industry as an IT Auditor, a short one in Mazatlán with a Mexican research center in aquaculture and environmental management, and a more than 20 year run as a management consultant for three international consulting companies.

In 1992 he sailed with his family in their 32-foot cutter from Canada to Mexico where they lived on the boat for almost two years.

He has a long running blog at http://prebenormen.com with over 900 posts, some of which have been republished by others. Before that he owned the site the Digital Norseman (now defunct) where, among other things, he published a handful of short stories. This, and two incidental articles published in the Viking Heritage Magazine about the replica Viking Ship ‘Munin’ built by the British Columbia Viking Ship Project for which he was the chairperson, whetted the appetite for concentrating more deeply on writing.

Preben is now retired from the traditional workforce and lives in Progreso, Yucatán, Mexico where he is finally dedicating his time to a long backlog of writing projects of which this book is a product.

Preben is married with a grown daughter and spends his spare time taking long morning walks on the beach followed by a swim in the Caribbean Ocean, cooking, reading, and exploring his new home base, the Yucatán peninsula.