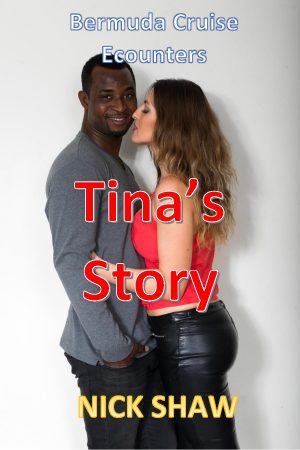 Tina, a white porn performer, and her partner, Barry, are on a cruise to Bermuda. She is scheduled to perform in an interracial porn feature with Jon, a local black who works as a male escort. Since the project is financed by Sam Cohen, a producer with Hollywood contacts, she sees this as her chance to break into mainstream movies.
When Tina meets Jon in Bermuda, she discovers a sympathetic young man who shares a common interest in acting in theatre. While Barry films their sex scenes, the two develop an emotional bond.
This leads to growing tension between Tina and Barry. Earlier when Barry had asked Tina whether she ever had relations with black men, she refused to give an answer. This becomes a source of friction.
During the shooting of the feature, Tina notices that Barry gets uncomfortable whenever she warms up in her foreplay with Jon. Often he decides to stop shooting in the middle of scenes. Fed up with his behaviour, she confronts Barry, stating that she wants artistic control over the production.
Will Tina will be able to convince Barry to relinquish his jealous control while coaxing the best performance from Jon?
Read the book to find out if this plays out between Tina, Barry and Jon.
Caution: this book has explicit descriptions of sexual acts and is recommended for 18+ adults.

Book Excerpt/Sample
When Tina requested Barry to stop at the New Otani Hotel, little did she realize that her going to the restroom would lead to a chain of events, which would end up with her doing an adult sex feature with a black man in Bermuda.
“I’ve got to go for a pee.” Tina downed her vodka martini and got off her bar stool.
“Do you know where the restroom is located?” Barry touched her arm.
“I know my place around here. We have been to this hotel before.” She tucked her handbag under her arm and walked through the door leading to the passage way.
The passage was crowded with people, many strolling casually. A few women were dressed in gowns, probably attending a formal dinner in the ballroom. Winding her way through the crowd, Tina hurried towards the restroom.
Entering the spacious restroom, Tina was relieved to see that it was empty. She rushed into the nearest toilet cubicle, lowered her panties, and let the stream flow. Just as she left the cubicle to wash her hands, a tall blonde in a blue gown entered the restroom. She recognized the face. It was Birgit Larsen, a Danish actress. She had not met her since they had starred together in a soft porn movie a decade ago.
“Hi, Birgit. We have not seen each other since a long time.”
“Hi, Tina. Fancy meeting you here in the restroom of the New Otani Hotel.” They kissed each other on the cheeks and Tina noticed Birgit’s golden blonde hair immaculately coiffed in a bouffant and her diamond earrings. She had come a long way from her days as an adult movie performer.
“I am here with Barry. We just came for a drink.” Tina washed her hands while Birgit examined her face in the mirror.
“I have come here for the AIDS charity event.” Birgit opened her handbag and took out a lipstick.
“It must be a big occasion.” Tina dried her hands with a bunch of paper napkins.
“I am here with the crew from The Big Bash,” Birgit said, lightly running lipstick over her lips.
“I must congratulate you.”
“Why?” Birgit looked at Tina.
“CNN has reported that you have been nominated for an award for your role in The Big Bash.”
“Golden Globe has four other nominees for the best supporting actress and I am not the favourite.”
“I liked the film. At least, you have made it into mainstream movies.” Tina faced Birgit.
“What about you?”
“I am still stuck, acting in porn features.” Tina shrugged her shoulders.
“You can make it too. Remember our weekends at the Actor’s Workshop?”
“I am not using my acting skills in porn movies.”
“You have to stop doing mom-and-pop bedroom productions.”
“What are the options?”
“Why don’t you get in touch with Sam Cohen? He produces upscale adult movies with believable plots and snappy dialogue.”
“Thanks. I will ask Barry to call Sam. They worked together some years ago.”
“I got my break into regular movies thanks to Sam when he gave me a role in Classic Woman.”
Tina remembered the film. It had won an AVN award for best film thanks to Birgit’s acting skills.
“I have one more tip,” Birgit said with a slight smile. “Did you ever think of doing an interracial film?”
“Not really,” Tina replied. “Why do you ask?”
“You would be perfect with your red hair and pale white skin.”
“Do you have a male actor in mind?”
“I was in Bermuda a month ago and hooked up with this male escort:”
Tina was surprised that Birgit paid for sexual services.
“This man has a whopper which is this big.” Birgit held up her hands about ten inches apart.
“So it is true what they say about black men.”
“Absolutely. I can say that he did stretch me a bit.”
“How did you find this escort?”
“Lady Jane Atkinson recommended him. He is a favourite with English socialites who fly for weekend jaunts to Bermuda.”
“What is this performer’s name?”
“Jon Silverton. Among his clients, he is known as Long Jon Silver.”
“Are you suggesting that I do a feature with Long Jon Silver?”
“He wants to do a porn feature in America and both of you would make a great couple.”
“Are you serious?”
“I met Sam Cohen the other day and he wants to do a seventies style retro porn film.”
“Do you mean a porn film with a plot and dialogue?”
“He is looking for porn stars who can act. Why don’t you give him a call?”
“Thanks for the lead. I will give it a try.”
“And by the way, just mention Jon Silverton. I have already talked to Sam about giving him a bit part.” Birgit picked up her handbag, taking one last look at the mirror.
“Take care.” She gave Tina a quick peck on her cheek and left the restroom.
Tina glanced at her image in the mirror. She was forty-five but looked ten years younger. It was a stroke of destiny that she had met Birgit in the restroom. She had badly wanted to break into mainstream movies and getting a role in Sam Cohen’s movie could be a ticket to big time. She decided to ask Barry to set up an appointment with Sam Cohen.