You are here: Home / Buyer's Guides / Time Is Irreverent by Marty Essen 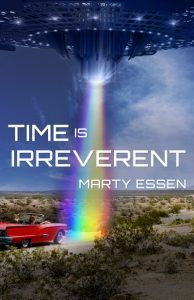 Time Is Irreverent by Marty Essen

What if you could make a change to history that would eliminate the Spanish Inquisition, American slavery, World War II, global warming, and an egomaniacal US president who thought he was smart enough to drop nuclear bombs here and there without negative consequences? What if that change also made the United States and 5 billion people poof from existence? Would you do it?

When alien time travel specialists, the Krichards, learn of President Handley’s game of dodge the mushroom cloud, they race to Earth to investigate. For them, the question of whether it’s worth it to change history is easy to answer, but they will only proceed if the human they deem best qualified to represent Earth agrees to make the change. Erasing Handley’s nuclear annihilation would require a quick jump to AD 31 to make a simple correction to the past. If the Krichards had selected a brilliant scientist or an elite athlete for the task, Earth might be in good hands. Instead they selected Marty Mann, a mildly successful travel writer, whose only superpower is not taking life too seriously. What could possibly go wrong?

Spanning from the Cretaceous period to 2056, Time is Irreverent is a hilarious, thought-provoking satire, with unpredictable twists, colorful aliens, huge dinosaurs, a smokin’ hot lesbian from the future, and a cameo from Jesus Christ himself!

What Inspired You to Write Your Book?
Time Is Irreverent is my way of dealing with the Trump presidency. Rather than being depressed about a leader who doesn’t share my values, I hid out in my writing room, creating a story that will be just as cathartic for people to read as it was for me to write. A poll showing over half of Republicans in favor of a Christian theocracy also inspired my plot. What effect would a theocracy have on women, gays, and lesbians? You’ll find out in the year 2056.

How Did You Come up With Your Characters?
For years I have made humorous posts on Facebook and my blog with a character I call Martyman. When I wrote Time Is Irreverent, Martyman became Marty Mann, and I changed the character’s personality to fit the book. As the point-of-view character, Marty Mann is a likable man with a big heart, who gets by using his wits instead of brawn. The main female character is Nellie Dixon. I didn’t know that she was even going to be in the book, until Marty Man ended up trapped in 2056. At that time, the United States is a strict theocracy, where being gay, lesbian, listening to rock and roll, and alcohol are all illegal. I wanted to send Marty Mann on an epic road trip across this dystopian version of America. Creating an odd couple buddy adventure with heterosexual Marty Mann and lesbian Nellie Dixon turned out to be magic. And the beautiful, outrageous, snarky, Nellie Dixon soon becomes everyone’s favorite character.

Book Sample
I awoke before Nellie, took a shower, and loaded all my stuff and the box of booze into the trunk of the car. She was still asleep when I returned, so I left her a note that I was going to walk over to the shop and pick up our cassettes.

When I got back a half hour later, Nellie was just turning off the shower. I flicked on the TV and scanned the stations while I waited. Eventually, she strolled out of the bathroom in a new outfit. It was similar in style to what she had worn the previous day, yet somehow she looked even more stunning in this one. Despite her permission to ogle, now that we were becoming good friends, I didn’t feel right doing it. Still I wouldn’t be human if I didn’t at least take a glance. Okay, fine—I stared at her as if she were an amazing work of art. But I most definitely averted my eyes before it became an official ogle.

As we stepped out the door of our second-floor motel room, I asked, “Where should we go for breakf—”

“Shh!” Nellie lowered her finger, and we both peeked over the railing.

Standing directly below us, next to the T-bird, were two police officers.

“How did they find us?” I whispered.

“Your car doesn’t exactly blend in,” she whispered back.

My instinct to protect my new friend kicked in. I started to say something, when she shushed me again.

“I’ve got this. Take my bag, give me the key card, and stay out of sight. Once I get the men into the room, start the car and lower the top. Be ready to rock and roll.”

I stood back as Nellie strutted down the outside stairs and couldn’t resist spying from above when she approached the cops—her entire body oozing with sex.

“Are you Nellie Dixon?” asked the older of the two policemen.

“Maybe. Did I do something wrong, Officer?”

“We have orders to return you to Immokalee and to bring the owner of this car in for questioning,” said the younger man.

She turned to the older man. “How about you?”

She pursed her lips and blew a kiss. “With these?” She held up her key card and swayed up the steps with the two men in hot pursuit.

I hurried in the opposite direction, ran down the far steps, and raced to the T-bird. I fumbled with the keys before cranking the engine and dropping the top. Then feeling that I had a little time, I turned the car around for a quick exit, hopped out, and began letting air out of the left front tire of the police car. When I heard the motel room door slam, I jumped back into the front seat.

“Go! Go! Go!” Nellie yelled as she vaulted over the door and landed in her seat.

I squealed out of the parking lot as she leaned her head over the door and spit in rapid succession. I raced a few blocks in one direction before quickly turning in another. Nellie kept spitting.

“What are you doing?” I asked.

“I can’t. This is the car chase scene in our epic road trip!”

“Pull over!” she screamed.

I swerved to the curb and tossed her the keys. She ran to the rear, opened the trunk, grabbed the whiskey, and threw the keys back to me. As soon as she landed back in her seat, I floored the accelerator. Then I remembered to start the car, and we were off!

We sped down the road with Nellie first gargling with the whiskey, then swallowing several mouthfuls.

When I looked in my rearview mirror and saw no one, I reduced my speed. “What happened back there?”

“Okay, take a deep breath and start from the beginning.”

She inhaled and slowly exhaled. “Once I lured the men into the room, I knew I had to separate them. No way could I take on two at once. So after I unzipped the older cop’s fly, I accused the younger cop of staring too intently at his partner. Since nothing is worse among male police officers than even the hint of being gay, I convinced the younger cop to wait in the bathroom, promising him the same privacy when it was his turn. Then I pushed a chair under the bathroom doorknob.”

“It’s amazing what a man will do if he thinks it will lead to his helmeted eel getting its gills wet.”

“When I turned around, the older cop was lying on the bed with his pants already off and his little moray standing at attention. I thought I could be like an actor and just play the part. Get him excited enough that he couldn’t walk, and get out of there. Anyway, I’m obviously not experienced at such things. So I just positioned myself between his legs, licked my lips suggestively, leaned over, and uh . . . bit him!”

I cringed. “Did you draw blood?”

“Oh, yeah. It wasn’t my intention, but it turns out those things are much more fragile than I imagined they were.”

“When the man screamed, I let go and ran out the door.” She took another swig of whiskey, swished it around in her mouth, and spit it onto the road.

I held out my hand, and she placed the bottle in it. I took a few swallows before handing it back. “Thanks for taking one for the team.”

“Oh, you would have done the same thing for me.”

I pondered that for a moment before erasing the image from my brain. “Hey, we haven’t had breakfast yet. Keep an eye out for a diner.”

“Gimme another hour. . . . And if you order anything that comes with sausages, I swear I will kill you.”