You are here: Home / Bargain Books Under $3 / The Takeover by Jonathan Dunne 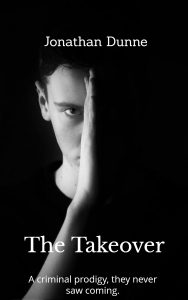 The Takeover by Jonathan Dunne

Ireland’s underworld is run by the barbaric Doherty family. The head of the clan, Malcolm Doherty, has infiltrated all levels of public office and rules the city’s criminal landscape without mercy or compassion.
Gerald O’Brien is the incorruptible cop on the Dohertys’ trail, obsessive and indefatigable, yet unable to bring them down.
Nathan Corbally is a horrifically abused child, cursed with a terrifying intelligence and raised by a monstrous father, he thieves to fend off starvation. When he steals a piece of clothing belonging to the Doherty family, he sets off a chain of events that will pit him against the rulers of Ireland’s underworld.
Three lives, steeped in violence, are about to clash in a violent grab for absolute power.

What Inspired You to Write Your Book?
Call of the Wild and White Fang by Jack London. I'm fascinated by human capacity to adapt to the harshest environments. In this book I chart the desensitization of a child though violence and neglect and his rise to become the terrifying nemesis of the Irish godfathers.

How Did You Come up With Your Characters?
My area is one of the most violent and deprived in Ireland's capital city, Dublin. Unemployment rates are high and crime is rampant. I understand the culture better than most and until I returned to school as a young adult these were the stories I grew up listening to and witnessing.
I've a broader view of society now, and education has opened my eyes to the wider and more complex world we live in. My formative years planted a seed that allows me to write on a subject I'm all too familiar with.

Book Sample
Nathan watched the man. Malcolm wore a navy tailored suit and a starched white shirt. He was slightly over six foot, his head shaved, his beard perfectly groomed. This was the head of the Doherty family; the most powerful criminal family in Dublin. Malcolm wasn’t the biggest in the family but he did carry a big bulk with most of the weight across his shoulders. He knelt down beside the injured boy.
‘Son, you robbed the house of one of my brothers. He caught you on CCTV and that jumper belonged to his dead mother-in-law. So it’s of sentimental value. We didn’t know who you were until your dip-shit of a dad tried to sell it to one of my employees. Now, don’t lie to me. Did you do it?’
Nathan nodded.
‘Did your father send you out thieving?’
He shook his head.
‘Why did you take only a jumper when you could’ve taken jewellery or money?’
With his jaw badly damaged, his words slurred. Nathan leaned forward and took up the bloody pen. The men pounced but Malcolm shouted at them to stay still. Nathan wrote along the columns of an old magazine.
I only steal food…pull-over reminded me of my ma…smelt the same…that’s all.
‘What’s your name, boy?’
He wrote, Nathan Corbally.
There was instant recognition in Malcolm’s eyes. ‘Your mum was Glenda Corbally?’
Nathan nodded, yes.
‘Open that fridge for me.’
Nathan began to write again. I didn’t eat all of the food. It’s under the floorboard in the bedroom.
A look of sympathy passed across Malcolm’s face.
The henchman turned up his nose.
‘There’s mouldy cheese in here, boss. This fridge hasn’t seen food in many a year. You’re a dirty bastard, Peter.’
Malcolm turned his gaze on Peter.
‘Look at this place, Peter. You’re a fucking animal. This boy is forced to rob so he doesn’t starve. And you’re pissed every time I see you.’
‘Hard job, Malcolm, raising a boy like Nathan…’
Something passed between Peter and Malcolm that wasn’t lost on the boy. Malcolm walked over and smacked Peter in the face, hard.
When Malcolm turned he asked Nathan.
‘What’s the bandage covering?’
‘Stitches,’ Peter replied.
‘How did he get the stripe?’
Nathan shot Peter a look of fear as Malcolm bent low and looked at the stitches.
‘Did the hospital ask any questions?’ he asked softly.
‘The boy stitches himself,’ said Peter. ‘He learns all that stuff from books.’
Malcolm’s eyes widened, ‘You stitch your own wounds?’
Nathan nodded.
A dark look came across Malcolm’s face. He approached Peter slowly.
‘I’m going to make sure this boy has food and clothing. If you lay a hand on him again…well…let’s say I won’t be pleased. Do you understand me, Peter?’
‘Whatever you say, Malcolm.’
‘Nathan, if you ever need anything again, go down to my sister’s shop and ask for me. She’ll make sure I get the message. A package will arrive in an hour and there’ll be clothing and food. Once a week, food will be delivered so you don’t go hungry and your dad is going to take you to the hospital…right now!’
‘No problem, Malcolm. I’ll do that now. Malcolm, I’ve no money to get to the hospital.’
‘Give that piece of shit fifty quid,’ Malcolm ordered as he left the flat.

Jimmy Ganly, Malcolm’s lieutenant, fell in beside his boss as they walked down the stairs.
‘Jimmy, keep a close eye on that kid.’
‘He’s a statistic, Malcolm, like the kids in the other fucked up families around here.’
‘He’s ten years old, Jimmy and he knows how to stitch his face better than any nurse. He also got past my brother’s security system and managed to stab Robbie with a pen and Robbie is no slouch. What does that tell you?’
‘He’s smart and nuts.’
‘My dog is smart, Jimmy,’ Malcolm snapped.
‘This child is something completely different. He won’t be young forever and did you see those eyes?’
‘What do you mean, boss?’
‘I recognise a lunatic when I see one, I also recognise intelligence. This kid sat there and sized me up for a knifing…I could see it in his eyes. Call it superstition but I saw something frightening. Maybe I’m just being overly cautious but let’s keep a close eye on Peter Corbally.’
‘Ok, boss, but I think you just need a holiday.’
‘Maybe, Jimmy…maybe.’