You are here: Home / Fiction / Romance / The Stalker by Amanda Lake 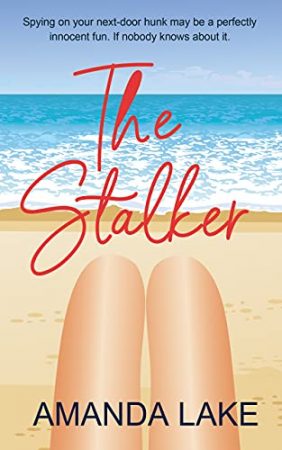 Spying on your next-door hunk may be a perfectly innocent fun. If nobody knows about it.

Olivia Roberts thought she found a perfect way to mend her broken heart – by secretly watching her hot neighbor. And it worked. At least until her little activity got blown and her next-door cutie turned to be a snotty jerk. Realizing she needed to change her way, Olivia did just that. She packed her bags and left for a nice vacation. Mediterranean sun, crystal clear water, and exquisite wine. Bliss.

But her new perfect plan had just one flaw – thinking that her troubles will stay back home. Not if the trouble happens to book the same vacation. And comes in the form of her gorgeous neighbor.

Link To The Stalker On Amazon Kindle Unlimited

What Inspired You to Write Your Book?
Everybody has their own opinion. And that especially goes for the popular subjects, for example, the GOT series – people are either loving or hating it. But what if two persons coming from different worlds end up in the same place? What if they are so different to confirm the old opposites attract principle?
Then we get a completely new set. A hilarious, lighthearted, and above all loving story about a couple falling for each other, even if the odds were against them.

How Did You Come up With Your Characters?
My friends have very strong opinions about several topics. And often they start a truly hilarious debate that starts with raised voices and inevitably finishes with lots of laughs. For the few of them, it was exactly that specific spark that lighted their hearts showing they did meet their true match.

Book Excerpt/Sample
Honestly, how silly she could be, thinking how thoughtful boyfriend he was after giving her something like that? A book saying that she wasn't smart enough. At that moment, she would rather put his sorry arse on the stake and burn him alive. But the damn book will have to do for now. She was aware the Francesca looked a little scared, but she didn't care.
So she pursed her lips, lit the lighter and put the flame under the book.
It started slowly, almost unwillingly, like the damn thing was to put up a fight, but then it started to burn. Olivia dropped it into the pot and watched the flames in front of her. It was kind of hypnotizing, she couldn't turn her eyes from it.
“How very… nazi of you,” Francesca said coldly, clearly disapproving the sight. “What's next, Führer, throwing Molotovs at the synagogue?”
“Don't be an idiot,” she replied calmly, finally waking up from her arsonous trance. “I was just making a stand. It's not like I killed someone. I'm burning a book, that's all.”
The same moment she said it, Olivia realized what she was doing. And it was horrible.
“Oh, God, I burned a book! Fran, I burned a book! Why did you let me burn the bloody book?!” she screamed at her.
“I don't know!” Fran yelled back. “I wasn't expecting that you will actually do it!”
“Well, put it out! Turn off the fire!” Olivia was panicking.
She couldn't move from the bloody couch and there was a book burning right in front of her. The living room was full of smoke and Francesca looked shocked, wildly watching around and trying to find something to pour on the fire. Finally, she ran towards the kitchen and got back holding a glass of water. She splashed it on the burning book, leaving a truly sad sight in front of them.
They both looked at the crime scene in complete silence.
The inside of the large pot turned black, like the remains of the unfortunate book in it. Because of that damn smoke around them, Olivia's eyes filled with tears. But it wasn't until the first one found its way down her cheek that she realized how miserable she felt. And why.
She was Olivia Roberts, a girl who scandalously humiliated herself by falling down the stairs in front of all those people. Someone who hurt herself so badly that she was condemned to lay down and watch the ceiling for almost a month. A scorned woman who just got dumped by her boyfriend through a text message. And finally, the disturbed arsonist who burns books at 4. a.m. like some seriously deranged terrorist.

Author Bio:
Amanda Lake is a rom-com author who honestly enjoys writing her stories. Have you ever found yourself staring nowhere in particular, looking incredibly silly, just dreaming about what kind of books you would like to read? Well, she did. And then she started writing it.

Which led her to publish her last book, The Stalker. She is currently preparing her rom-com series High Spirits to be released and hopes that the readers will love its characters as much as she does.