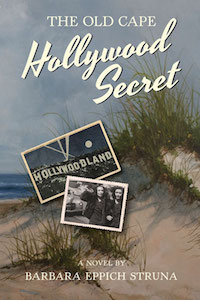 In 1947, Maggie Foster and her cousin, Gertie, leave Cape Cod for Hollywoodland in search of glamour and fame. One girl returns home and the other disappears. Seventy years later Nancy Caldwell travels to Hollywood and discovers the paths of Maggie and Gertie. A novel of historical suspense, “The Old Cape Hollywood Secret,” is written in alternating chapters and unfolds across time to reveal the tragic story of two young girls and a murderous secret.

What Inspired You to Write Your Book?
I love Old Hollywood and the 1947 era with all of its music, clothes, and nostalgia. I'm fascinated with the history that surrounds us. My two sons also live and work in Hollywood. I enjoyed visiting the restaurants and hotels that were popular in Hollywood 1940. My imagination went crazy as I stepped across the threshold of the beautiful Georgian Hotel in Santa Monica. I immediately conjured up a connection to Cape Cod and the story began to unfold in my mind.

How Did You Come up With Your Characters?
Most of my characters came from a smash-up from old movies and a lot of research. When I travel in planes, busses, or boats, I'm always watching and observing people as they pass me, especially listening to their conversations!

MAGGIE GRIPPED the diamond ring in her hand. Her knuckles turned white. The other hand touched the pearls on the black pouch, like prayer beads. She quickly sat on the floor of the closet to steady herself, but she couldn’t stop shaking. She left the door ajar to give her a thin view of the tiny studio room. Her heart thumped against her chest as adrenaline coursed through her veins.
She watched the studio door open. Her cousin Gertie tried to stand her ground just inside the room. She sounded nervous when she asked the two men, “What do you want?”
Maggie’s knees were tight against her chest. Tugging at the bottom of her cotton nightgown, she pulled it even lower to cover her bare feet. She caught her breath when she saw the men push through the doorway.
There was a quick scuffle. Gertie shouted, “Hey, you can’t push me around.”
Maggie could only see the back of one of the intruders. His brown suit and fedora hat loomed large, blocking most of her view. Swallowing hard, she watched him shove her cousin down onto the bed. “You’re outta time, kid. Where is it?”
Gertie was defiant. “Hey, what’s the idea?”
The other man was short and squat. “Let’s just say we want what you stole.”

Gertie tried to stand up. “I don’t know what you’re talking—”
The bigger man slapped her across the face with the back of his hand. She fell back on the bed.
Maggie covered her ears to block the yelling and screaming. She quickly closed her eyes and remembered her mother’s parting words to her: “You’re far too young to be on your own. You’re only eighteen years old. That Hollywoodland is dangerous.”
Maggie whispered in a prayer, “I want to go home. I just want to go home to Cape Cod.”

MY BRAND NEW Bounty Hunter Pioneer metal detector leaned against the wall in the garage. It was a Christmas gift from my husband, Paul. He said the salesman had laughed when he’d told him it was for his wife.
I grabbed the detector and set out toward the back acre, onto a new path that now connected the other paths I’d carved out of our woods over the past years. My hiking boots avoided the deer scat that dotted the trail. I smiled and wondered if the deer appreciated my work of clearing away the brambles and thorns that grew throughout our property. This was the first time I’d walked the new path since I’d cleared it last fall. It had been a mild winter across Cape Cod and the sandy peninsula that I call home had begun to awaken. The air was brisk, ground damp, wind mild, and sun shining; perfect for exploring.
I swung the electronic wand right to left as I ventured further into the woods, my spade clanking against the ground as I dragged it behind me with my other hand. Within minutes, I’d found a few rusty nails, a broken lawn mower blade, and a #2 fishing weight. To my left, I noticed a big tree had fallen during the winter. It looked as if the old tree had grown through the boulder over the years, eventually splitting the rock into sections. I veered off the path to take a closer look. A pile of stones and clamshells were heaped together in a mound under the mangled roots. I could see a hint of the color turquoise in the dirt. I scratched at the forest floor with my work gloves and unearthed a lone coffee cup. It was a beautiful piece of Fiesta ware. There was only a small crack in it and the handle was still intact. I tried to piece together reasons why this little treasure had taken a journey into the woods. When I’d researched our circa 1880 house, I’d uncovered four distinct owners, one being a cranberry grower who’d owned the house from 1940–70. I also knew that Fiesta ware hadn’t introduced the color turquoise until 1937, so it must have been the cranberry farmer who’d brought the cup so far away from the house. I sat down on one of the larger sections of the boulder that had broken away to enjoy the peace and quiet. Back in the 1940s, this area had been open farmland and would have offered a grand view of the Namskaket River. I laughed to myself and guessed that the cranberry grower wasn’t drinking coffee back here. He’d probably had to hide his whiskey from his wife.
It was noon by the time I’d satisfied my adventurous spirit. Paul was painting in his studio. “Look what I found,” I announced as I spread out my treasures on a piece of Kraft paper.
Paul looked them over. “Glad you like your present.”
I returned the detector to its place by the garage door. “I’m going to check the mail.”
The sun had ratcheted the temperature into the fifties. Most of the letters were addressed to me, Nancy Caldwell. One had a return address from the National Treasure Hunter Society. I was curious. By the time I reached the deck, I’d opened it and was reading its contents out loud.
“Ms. Caldwell, we have heard of your recent discoveries of lost treasure and would like to invite you to speak at our annual meeting, this coming June, in Hollywood, California. Airfare and hotel accommodations will be provided.”

Author Bio:
Internationally best-selling author Barbara Eppich Struna is fascinated by history and writes a blog about the unique facts and myths of Cape Cod. Her published books are The Old Cape House and The Old Cape Teapot; her third novel in the Old Cape Series is The Old Cape Hollywood Secret. Besides being a storyteller at heart, she is currently president of Cape Cod Writers Center, a Member in Letters of the National League of American Pen Women, International Thriller Writers, a panelist at the International Thriller Writers – Thrillerfest 2016, and a member of Sisters in Crime and two writing groups.