You are here: Home / Bargain Books Under $3 / The Creators by Rick Moskovitz 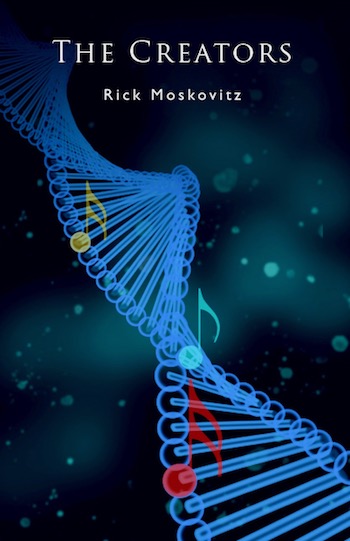 The Creators by Rick Moskovitz

A teenaged Natasha Takana seeks to decode the remainder of the hidden DNA code that became the basis for a new religion reviving Creationism in A Stand-in for Dying. Her quest takes her on a voyage to a parallel dimension to learn the fate of the Creators’ civilization.

The conflict between the warring factions of Brink of Life is rekindled, sweeping Natasha into the middle of it in a pursuit that crosses the boundaries of worlds and time.

What Inspired You to Write Your Book?
This is the final installment of The Brink of Life Trilogy, drawing from characters and plot lines of the previous books. I wanted to develop the concept introduced in A Stand-in for Dying of the role of an intelligent entity in creating the human genome. My imagination led to a dying civilization in a parallel dimension. As I envisioned what key might unlock the mystery, a musical key came to mind.

Voyages across dimensions to both alternative pasts and alternative futures verge on the metaphysical and stretch the imagination. While I anticipated that The Creators might evoke more skepticism among my readers than the earlier books, I enjoyed the freedom of letting my imagination ride. The Creators was the most fun to write.

I also enjoyed the chance to delve into the backstory of one of the villains of the earlier tales, to explore how he had turned to the dark side, and to provide an opportunity for redemption. As in Brink of Life, the interplay between body and mind informs many of the characters’ identities.

Book Sample
Abraham walked along the water’s edge and took greedy breaths of fresh salt air. He gazed out toward the horizon and then back across the beach at the cluster of cottages that housed his small band of followers. When he looked again along his path, the sand curved gently before him, the visible arc of the circular outline of the island.

He could walk all the way around it in less than an hour and could run it in twelve minutes. The island was just a mile across and less than a square mile in area, but large enough for Abraham and the ten men and women who accompanied him to thrive, distant from the closest mainland and distant enough from the nearest islands to keep them cloaked in privacy.

As his arms swung, his eyes fell on his brown and sinewy forearms and his rugged hands. He smiled and broke into a run, feeling his powerful legs propelling him forward and his feet striking the surface of the water before embedding themselves in the soft wet sand. Two years on Bethany Island and Abraham still exhilarated in the liberty of his surroundings and the intoxicating vigor of his body.

He picked up the pace. The ground began to blur until he was stopped in his tracks by an agonizing pain that shot through his right foot. As he lay on his side, he watched the sting ray wriggling in the damp sand, trying to free its barb from the bottom of his foot. He reached down, grabbed it by a wing, and tugged sharply, pulling it free. As it caught a receding wave and swam to freedom, the pain in his foot subsided marginally, blood oozing from the wound.

Within less than a minute the bleeding had stopped and the wound was barely visible. Within five minutes, the pain had vanished, and he was up and running even faster than before, grinning ear to ear. This wasn’t his first encounter with a ray and wasn’t likely to be his last. A few moments of pain was but a bump in the road that only reinforced his sense of vitality. Nothing could stop him.

Feeling so alive was almost enough. He came close sometimes to relinquishing the mission that had brought him to this juncture in his existence. The thought of just being tantalized him, threatening to drive the resolve from his spirit. But fervor would always come roaring back to pluck him from his place in paradise. Lust dies hard and lust for power harder still.

From the deepest recesses of his mind rose memories of other beaches, other times…a warm, spring night in Daytona, making love on the beach in a drunken haze. When he closed his eyes, for a moment the seductive red lips of his lover smiled once more upon him, the image dissolving with the realization that she’d now be ancient and withered if alive at all.

Then he was on the fifth mile of a swim in the icy waters off the California coast, the culmination of his Basic Underwater Demolition training as a Navy Seal, recovering from nausea and vomiting, fighting leg cramps and current and overcome with hunger. His body was young and hard then, too, a prime specimen of manhood testing his limits of strength and endurance. But the level of fitness he now enjoyed would have been unimaginable even then. He smiled as he envisioned making the swim today with ease and leaving his fellow trainees in his wake.

Paradise was also now threatened by another kind of lust that had newly intruded upon his consciousness after decades of dormancy. His vital young body was awash in hormones and longing that, at least for the moment, had no ready outlet. The five men and five women who accompanied him on this journey were the only other human beings within reach. And the combination of the histories they shared together and the biology of the bodies they possessed made the prospect of couplings daunting. Even the first pair to set foot on the island, who’d adopted the names Adam and Eve, failed to consummate a relationship when Adam discovered to his chagrin he was not at all attracted to Eve or, for that matter, to any woman.

Perhaps it was just as well. At least for now, procreation on the island was forbidden. Pregnancies and children would distract from the mission and increase their vulnerability to adversaries. But pregnancy within their kind also carried unknown risks since each of their bodies had undergone the Ambrosia Conversion that completely arrested the aging process. Few such individuals had ever reproduced, and Abraham possessed little information about the results of these unions.