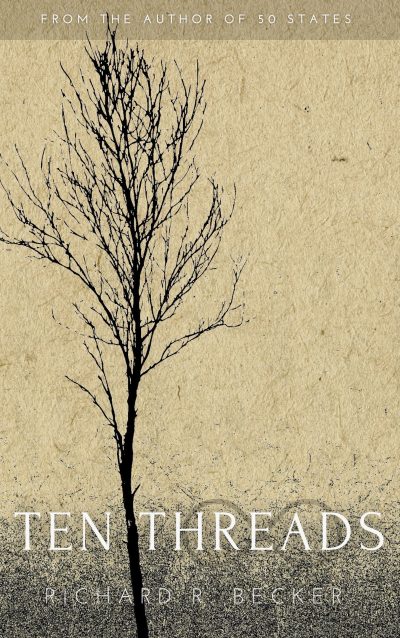 Published as a Kindle exclusive, it can be read as a stand-alone anthology or as a continuation of stories found in 50 States. Specifically, this collection features stories set in Idaho, Louisiana, Wisconsin, Utah, Pennsylvania, California, Vermont, Nevada, Maine, and Kentucky.

• An Idaho farmer who earns a second chance at life finds that the past has a hard time letting him go.
• A risk-averse young man must make a bold move after stumbling into a nightmarish government biohazard. • An aging alcoholic vigilante finds common ground with a teenager in a secret witness protection program.

50 States readers will find that eight stories feel like continuations. The other two, while connected to their counterparts, aren’t strongly linked. Whether read together or alone, Becker’s body of work plays out like a puzzle with new little bits shared a few pieces at a time.

What Inspired You to Write Your Book?
The idea of writing Ten Threads as a companion to 50 States came about long before its initial release. I always intended that the stories in my debut be carried forward or continued into a string of short stories or longer works, with each thinly or strongly interlinked. I initially considered releasing a second 50-story collection, but eventually settled on publishing ten as a Kindle exclusive, a precursor to my next collection and first novel.

How Did You Come up With Your Characters?
Most of the main characters in Ten Threads already exist in 50 States, with the possible exception of Nevada. Some of them have been recast from supporting characters to primary roles. Or, in some cases, like Idaho, I've changed points of view to keep it interesting.

Jessica woke on a farmhouse couch to the smell of frying bacon and the sound of popping toast. She was momentarily disoriented as her eyes adjusted to the sunlight, unsure of where she was and how she got there.

“Thank you,” she said, pushing the heavy wool blanket down and straining to sit up.

She was still fully dressed, head fuzzy from the drinks that she and yesterday’s hero had ordered to take the edge off after he rescued a young mother and a six-year-old boy from a burning car. She had never seen anything like it. With no regard for his own safety, he had pried the front door open and climbed into the burning vehicle to save them.

She sat up and reached for the coffee. The warmth of it reminded her that the fire had burned one of his arms.

“How’s your arm?” she called out, slightly embarrassed by how loud she said it.

“I’ll live,” he said, standing not too far behind her. “Oh, I’m not used to having company. Do you need cream or sugar or anything?”

After the roadhouse, she had driven him back home. She was too tired to find a motel, so he offered his bed, admitting it had been years since he changed the bedding in the guest room or any of his daughters’ rooms. There wasn’t any reason to since the divorce.

It could be like that, she knew. Divorce doesn’t care who or what it consumes. She still carried the emotional scars from her parents’ divorce and her own failed marriage. They were inexplicably intertwined. Her childhood home had been the backseat of a car on Interstate 5, shuffled between her mother’s house in Salem and her father’s apartment in Portland. Her ex-husband knew this when he married her but still couldn’t grasp why she always equated road trips as their last chance at reconciliation. As their relationship closed in, she needed space.

When Wyoming's wide open proved unable to remedy the real problem, she was on the road again but this time alone. In exchange for citing irreconcilable differences instead of a laundry list of reasons, including a half-dozen bruises, he signed on the line and footed the $300 do-it-yourself filing fee.

She took a sip of the coffee. It was stronger than she liked, a bitter jolt that helped her stand up and drift toward the table where this curiously kind stranger was setting down breakfast for her.

“You didn’t have to do this,” she said, cradling the cup in two hands and surveying the scrambled eggs, bacon, and sourdough toast. The Mason-jar jams looked fresh.

There was an awkward pause between them, a moment when neither one of them knew what to do. They stood facing each other, hovering over their place settings and wondering who would sit first.

“Go on, have a seat.” He nodded, breaking the spell.

The uncertainty in his voice left her wondering if the connection she felt last night could survive the sunrise. He seemed more at ease over drinks at the roadhouse.

For joining the author’s email/newsletter list you will get:
A free short story preview with every newsletter