You are here: Home / Bargain Books Under $3 / Shared Madness by Rick Moskovitz 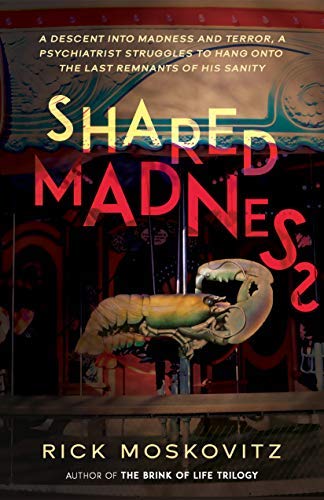 A psychiatrist treating a psychotic patient descends into madness and finds himself at the nexus of a deadly plot. Can he trust anyone in his struggle for survival and his quest to regain his sanity? Can you guess who murdered his patient and what drove him mad? Share his hallucinations and terror through his eyes and try to unravel the mystery.

What Inspired You to Write Your Book?
As a psychiatrist, I often struggled with competing ethical and legal responsibilities. In the course of providing treatment to relieve distress, I was expected to keep whatever my patients told me strictly confidential. At the same time, I was entrusted with preventing harm. Some patients posed the risk of harm to themselves, some of harm to others, and still others offered information about people around them who posed danger to them or to others. The responsibility to prevent harm was further complicated by my limited influence upon my patients’ fate.

Balancing the duty to maintain confidentiality with the duty to prevent harm and walking the often fine line between them caused me many a sleepless night. And the severity of the dilemma was directly related to the magnitude of potential harm that I envisioned.

The seeds of Shared Madness, originally titled Folie a Deux, arose out of this ever present burden and the aftermath of the attack on the World Trade Center on 9/11/2001. What if, I imagined, a patient were to share with me information about a possible future terrorist attack? And what if this information was shrouded in sufficient doubt that the consequences of withholding it weren’t clear or compelling? Would the potential magnitude of an unlikely event be enough to breach the confidence of a patient and perhaps even put that patient in legal or physical jeopardy?

I framed my story against a backdrop of a psychotic patient who heard voices and experienced delusions of persecution that altered his perception of reality. What might a psychiatrist believe about a tale of treachery told by someone with such an unreliable and distorted view of his world? And it occurred to me that if the doctor was also hallucinating and delusional, assessing the validity of the threat would become even more daunting.

I wrote a half dozen chapters starting in 2005 along with some character backstories, got stuck and filed it away while I continued to practice psychiatry. After retirement from practice, I turned again to writing, veering into science fiction, and completed the Brink of Life Trilogy in fits and starts over much of the past decade. The blank canvas of the future fed my imagination and the stories began to flow with increasing ease.

In the fall of 2019, I stumbled upon the nearly forgotten file of Folie a Deux. Having drawn my trilogy to a close and honed my storytelling craft, I embraced the project with new confidence. And I brought to the task a new perspective, venturing into the first person, writing entirely through the eyes of my protagonist, and balancing the constraint of that limited perspective with the freedom of living in my character’s head and experiencing his world fully. The story grew organically, expanding beyond its original framework into a full blown thriller.

How Did You Come up With Your Characters?
My main character, a psychiatrist, is a reflection of my career experience, although he is only my alter-ego when explaining how the mind works. The ethnicity of my other characters was dictated by their roles in the story. And since OCD is one of my special areas of expertise, writing about a character with OCD was both natural and fun. I would also consider Maine, one of my favorite places, almost as a character. The chapters set in Maine that included the character Otis were written during a vacation there. Ayuh.

Book Sample
“Wake up, Zack.” My eyes flicked open. I’d been in a deep sleep. The voice must have been the tail end of a vivid dream. I tapped my phone to see the time: 2:35 AM. I closed my eyes, took some cleansing breaths, and drifted back to sleep.

“I told you to wake up.” A woman’s voice. Loud, insistent. This time, I got out of bed and turned on the lights. I’d have to awaken fully to purge the thread of this dream from my consciousness. It was still three hours before it was time to get up. I went into the kitchen and poured a cup of milk.

“You know she likes you.” The same woman’s voice. It had to be coming from my phone. A butt call or a video playing in the background. I looked at the screen. It was dark. I tapped the phone. Nothing was open. I turned it off.

“You think she’s hot, too.” Someone was playing a horrible prank. I valued my privacy and didn’t have any of the listening modules that people put in their homes to interact with their devices. The only other possibility was my computer. I shut it off, too.

“Shut up!” I screamed. “Get out. Whoever you are.” But there was nobody in sight. I went from room to room, turning on all the lights. I was alone.

“He’s right, you know. You and Jamilah. In your head, you’ve already screwed her.”

My hands were trembling. Sweat was dripping from my armpits down my sides and from my forehead into my eyes, clouding my vision. My legs began wobbling, which made my whole body shake. I struggled to catch my breath and felt pressure like someone was pressing a blunt object against the center of my chest. I felt like I was dying. No, not dying…a panic attack. I’d never had one, but I’d heard many patients describe the symptoms. That’s what it was. The voice was just an embellishment, fashioned by my conscience.

I began to count my breathing to slow it down, then focused on its rhythm. The trembling stilled. The pressure released. My vision cleared. The voice was gone. I finished drinking the milk and went back to bed. The next sound I heard was the rippling alarm sound on my phone, telling me it was time to get up.

I shook off sleep and got ready for the day. The disturbance in the night left me more fatigued than usual, but I was grateful that the voice was gone.

All I could think about during my rounds in the hospital was whether Joe would show up at my office that afternoon. When I got to the office, I checked his appointment time: Two o’clock. I finished seeing my first patient of the afternoon and looked in the waiting room. He wasn’t there. I went back to my office and watched the clock, waiting for my receptionist to signal his arrival. By 2:30 I began to despair that he’d ever show up.

“What did you think?” said a voice that seemed to come from across the room. “Why should he trust you? You want to screw his wife.” My breath stopped short. I felt as though I was being strangled.

“Another panic attack,” I thought. Then I heard laughter.

“Think what you want,” said the voice. “I’m not just part of your panic attack.”