You are here: Home / Fiction / Mystery/Suspense / Roger and the Cancelled Czech by Jerold Last 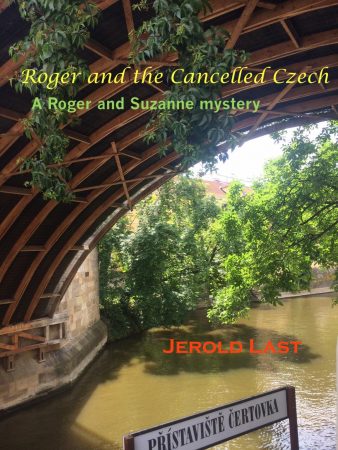 Private detective Roger Bowman investigates unsolved murders in Prague and Budapest, two of Europe’s oldest capital cities. It’s not going to be easy to identify the killers. The local languages are incomprehensible and the killers have had plenty of time to cover their trails on what are now cold cases. Is the Cobra, a shadowy character with major connections to the worlds of espionage and art theft, involved? And why are the local secret police interested in his investigations? Like all of the Roger and Suzanne series on Amazon Kindle, this is a tough, sometimes violent, but clean (no cussing, no sexual promiscuity) mystery that can be enjoyed either as a series entry or a standalone novel. Free from KU, also available in paperback format.

Link To Roger and the Cancelled Czech On Amazon Kindle Unlimited

What Inspired You to Write Your Book?
Last year, my wife Elaine and I toured through the areas mentioned in the book and personally experienced all of the locations Roger visits in the novel. I saw much of the story set against this backdrop in my head during our trip, and took notes and photos wherever we went. The plot fell into place based on what we saw in Prague and Budapest when we visited and the stories in our newspapers almost every day about political events occurring in the region in real life.

How Did You Come up With Your Characters?
This book is part of the Roger and Suzanne mystery series published on Amazon Kindle. The major characters already existed, in my mind and in earlier books in the series. The local characters were based on real people I met in Prague, Budapest, and Munich when I visited Eastern Europe last year, or were composites of real and purely fictional characters created for this story.

Book Excerpt/Sample
"I really wasn’t particularly worried about being followed to the synagogue. My ace in the hole, Vincent, had my back covered. But I couldn’t think of any good reason to share this advantage with Johanna or the men we’d be meeting. A little added security couldn’t hurt, and I wasn’t worried about Vincent, my personal Golem, keeping up with our simple evasive maneuvers. I smiled to myself at the image of my partner as a Golem. He was a bit small for the role, but pound for pound I’d pick him over the Golem in a fight with any of the secret police agents we’d encountered thus far on this case.

“Follow me,” instructed Johanna, as we went out the back door into the alley. Garbage and trashcans lined the walls behind the shops, contributing the odors of days of standing uncollected to the ambiance of the dirty, seedy alley. We trotted to the cross street at the end of the alley, slowed, and blended into the thick pedestrian traffic on the tourist shop-lined street that looked a great deal like the one we had just come from. Same narrow street with ancient apartments looming over both sides, same teeming mass of tourists wandering in and out of shops buying tourist junk to take home with them, wherever that might be.

We repeated the quick in one door and out another into a garbage-strewn alley routine, eventually finding ourselves back on the original street we’d turned in on, en route to the synagogue from the square. We were at our destination in less than the allotted fifteen minutes, ducking into the building as quickly as possible.

“Come with me,” Johanna instructed, leading me away from the main part of the building to a cluster of offices off a narrow hall leading toward the women’s section in its separate wing of the large building."

Author Bio:
The author is a Professor of Pulmonary and Critical Care Medicine at the University of California's Medical School at Davis, near Sacramento in Northern California. Jerry, a two-time winner of The Indie Book of the Day Award, writes fast paced “tweener” mystery books (tough mystery stories that follow the cozy conventions of no graphic sex and no cussing), all published as e-books on Amazon Kindle with six also published as paperback versions. Several of the books introduce the readers to South America, a region where he has lived and worked that is a long way from home for most English speakers. He and his wife Elaine lived previously in Salta, Argentina and Montevideo, Uruguay. Jerry and Elaine breed prize-winning German shorthaired pointer dogs; Elaine also provides technical advice for Jerry’s dog-related novels like The Deadly Dog Show, Hunter Down, Roger and the Cancelled Czech, and Abra Cadaver, as well as editing for all of the books.

Link To Roger and the Cancelled Czech On Amazon Kindle Unlimited