You are here: Home / Bargain Books Under $3 / Pianist in a Bordello by Mike C. Erickson 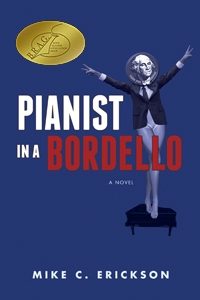 Pianist in a Bordello by Mike C. Erickson

Pianist in a Bordello

What would happen if a politician decided to tell the truth—the whole truth?
Richard Youngblood, aspiring Congressman, is about to find out. He’s running on a platform of honesty and transparency—and against the advice of his friends and advisers he’s decided to start with himself. His autobiography will lay his entire life bare before voters just days before the election.
And what a life he’s had. Born in a commune and named Richard Milhous Nixon Youngblood as an angry shot at his absent father, Richard grows up in the spotlight, the son of an enigmatic fugitive and the grandson of a Republican senator. He’s kidnapped and rescued, kicked out of college for a prank involving turkeys, arrested in Hawaii while trying to deliver secrets to the CIA…Dick Nixon Youngblood’s ready to tell all.
He’ll even tell his readers about the Amandas—three women who share a name but not much else, and who each have helped shape and define the man he’s become.
Are voters really ready for the whole truth?
Are you?
Pianist in a Bordello is a hilarious political romp through the last four decades of American history, from a narrator who is full of surprises.

What Inspired You to Write Your Book?
Sometime during the eighties I wrote (long hand on legal pad) what became most of Chapter One of PIANIST IN A BORDELLO. Just a few years ago I rediscovered this masterpiece when searching old files and I liked it even better than when I first wrote it. It is a fictional autobiography of Richard Milous Nixon Youngblood, who was born in a hippy commune on election day, 1968 and his mother, in an act of vengeance against the her absent husband, named him after the newly elected President.

How Did You Come up With Your Characters?
My characters are some of my best friends. I talk to them, related to them, and on one occasion I dreamed about them.

Links to Purchase Book – Click links for book samples, reviews and to purchase

Buy this eBook or Print book On Amazon