You are here: Home / Nonfiction / Travel / Passports and Pacifiers—Traveling the World, One Tantrum at a Time by Kaitlyn Jain 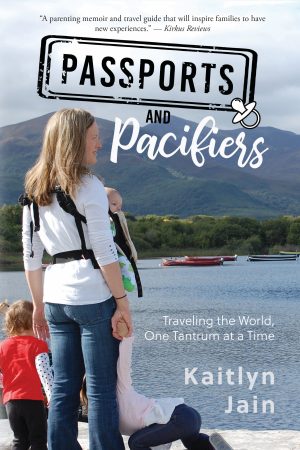 Passports and Pacifiers follows a young, naïve baby-wearing family on eight memorable, affordable, and nap-centered trips. It all started with two bumbling parents taking their Never-Sleep infant to child-loving Italy. Six years later, the tally of kids reached four (all under the age of eight) for an adventure across Scandinavia. Readers are regaled with misadventures, like losing the only pacifier of the trip, missing ferries, and traveling with a baby who refuses to nap. The Jains find deals and save where they can. They stay cheap, shack up with in-laws, and visit generous family and friends.

This book serves as an inspiration and guidebook to take your kids out of your comfort zone and explore.

Link To Passports and Pacifiers—Traveling the World, One Tantrum at a Time On Amazon Kindle Unlimited

What Inspired You to Write Your Book?
While in Scandinavia with my four children under 7 (flight was Kids-Fly-Free), I realized that what my husband and I were doing wasn't quite normal, but could be. Travel offers so many benefits—and is fun! I started writing about our journeys in the hopes of inspiring other families to expand their kids' horizons.

Book Excerpt/Sample
First Trimester—Preparation is key
My three-year-old middle daughter lay prone on the floor of Sao Miguel airport, her feet thrashing the air in the throes of an epic meltdown. I braced myself to avoid the impact from her Minnie Mouse tennis shoes, violently lighting up with each kick. She still wore her sheer-sleeved Cinderella pajamas and hand-me-down-thin pink cotton socks she had carefully selected for our red-eye flight from Washington, D.C. to the Azores off the coast of Portugal. Her matted hair mixed with the grime of the floor where hundreds, if not thousands, of people walked each day in filthy shoes from around the globe.
I had no sustenance to appease her, no pacifier to calm her. At that moment, her salve lay buried deep in a bag on the other side of the x-ray machine amid the diapers, toys, and snacks. I couldn’t even offer her my arms since they held her angelically sleeping baby brother. She had made it so many hours but had been broken by my placing her suitcase on the scanner. Apparently, she wanted to do it herself. Her face shone red with frustration as she screamed and cried, a huge production lacking any true tears. Walking through that final metal detector on her own two feet to that short flight was her final step.
This wasn’t our first challenge of the trip, and I was pretty certain it wouldn’t be our last. Our oldest had thrown up on the airplane. After discovering my fourth pregnancy just three days earlier on my son’s first birthday, those tingles of excitement I felt in my belly were beginning to morph into nausea. What would be next? I wondered. What had we forgotten?
“Can you imagine if we had another?” my husband joked to my unknowing, but horrified, parents who had joined us.
We were traveling the world, one tantrum at a time.

Chapter 1—Am I an idiot or just a weirdo?
Growing up middle class in middle America, travel to me meant days of driving to get anywhere. Crossing a river was exciting. Seeing a license plate from Alaska unreal.
As my family’s youngest, I fell under the shadows of the others—my super-athletic, likable sister; my bulldozer of a brainy brother; even my dad, a former professional athlete who returned to his small town. I could relate to my middle daughter crying out for attention with a tantrum. As a child, it had taken everything I had to keep up.
My sister, Kylie, was my hero, a She-Ra in my eyes. I wrote odes to her basketball skills as the state’s best player and used the tracks she etched in the snow as my guidepost. To avoid direct comparisons, I modified where I could, focusing on volleyball. I liked a sport where I could rise to the challenge with a well-timed ace but also float under the radar of complex team dynamics. At least after some practice. As the youngest child, I wanted attention—but not all eyes on me.
I still vividly remember when my high school coach, at one point the country’s winningest, thrust me into the spotlight. He was an intimidating bear of a man and probably reveled in allowing that University of Michigan-bound senior to humiliate me, a lowly freshman, by serving me off the court. She directed ball after unreturnable ball at me, at least a half-dozen times in a game to fifteen. I single-handedly lost that game, aided by my coach’s refusal to sub me out. Since I was ghostly quiet, he called me Casper, but he knew the threat of negative feedback on my performance would drive me to work harder. I quickly improved since I hated (and still do hate) failing or letting others down.
Then, three years later as a senior, I demonstrated that fear in front of an entire auditorium of athletes and their parents—though not my own since they were, fittingly, at one of my sister’s college games. I was smart but oblivious, a strong but painfully naïve girl who had moved from a small town to a larger school, a pebble in the larger stream of life.
At an end-of-season sports banquet, I got up to speak about our amazing basketball season with my teammate, Kim. My friend was tall and well-liked, gorgeous, homecoming court material. Kim either had fantastic confidence or faked it really well.
After she shared thoughtful team anecdotes, I edged over to the microphone to thank our fans. For that, I turned to the guys on the football team in the second row. That team differed from others at many other schools. Oh sure, they were a bunch of jocks, but we were no Friday Night Lights. They had one of the worst records of any of the teams at the event, but the seniors supported us and come to every game, home and away. They made signs and wore homemade t-shirts bearing our names. Perhaps one or two were fond of me, but all seemed to be head-over-cleats for my friend. They, and a few others, were our Super Fans.
As I went in for the close of my speech, I talked with the unnecessary confidence of a senior at the top of my high school game.
“I would ESPECIALLY—(pause for effect)—like to spank the football team.”
Spank the football team? Spank. The. Football. Team. Like my three-year-old stuck on one side of the x-ray machine in San Miguel airport, the “th” sound remained trapped behind my treasonous teeth.

Author Bio:
Kaitlyn Jain is a world traveler and dedicated mom to her four young children. She has visited over 25 countries and nearly all 50 states, dragging her kids wherever she can. Passports and Pacifiers is her first book.