You are here: Home / Fiction / Historical Fiction / It Happened in Silence by Karla M. Jay 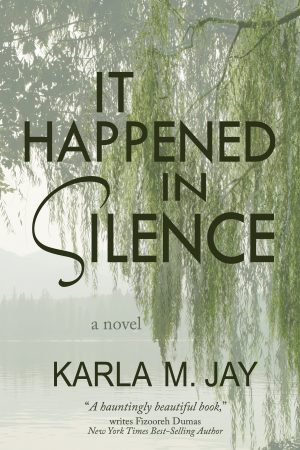 Set in a world where women of the KKK betray their neighbors, where horrors of unscrupulous foundling homes come to light, and buried mysteries are not all that hidden. It’s Georgia 1921. Mute since birth, fifteen-year-old Willow Stewart has one task to complete—to leave her Appalachian homestead and find a traveling preacher and her brother, Briar. When a peddler kidnaps her, she escapes only to face an unjust arrest and penal servitude. The laws are not on her side. Or her brother’s.
Briar is serving time on a chain gang with four months left. When an immigrant boy asks him for help, Briar must decide if he should jeopardize his freedom to help the penniless boy.
Soon Willow and Briar become ensnared in a world of cruel secrets, savage truths, deceitful practices, and desperate predicaments. This is a powerful tale of family, a celebration of decency, and the heartbreak of society’s injustices then that rings true today.
This novel delves into the gut and sinew of fairness, probing often inexplicable questions, as old and persistent as the forest itself.

Link To It Happened in Silence On Amazon Kindle Unlimited

What Inspired You to Write Your Book?
I was researching the KKK and discovered that women also joined in droves. I'd never read anything about that so I decided to write a novel that included it. I have always wanted to write a story about Appalachia so the setting was easy to come up with. Add to that information about the practice of baby farming and I was off to the races.

How Did You Come up With Your Characters?
I wanted the main character to be different so I made her mute but filled with beautiful thoughts and strengths. The main KKK woman was easy after reading a few books on their philosophies and practices. The story of the chain gang needed a strong male and I found a conflicted young man to fill that part in my head.

Author Bio:
Karla M. Jay is the award-winning author of When We Were Brave and It Happened in Silence. When she's not writing, she's reading, gardening, playing with her dog, or traveling to new places to try to find a story that has never been told.