You are here: Home / Bargain Books Under $3 / Holly and the Tiger by CP Stone 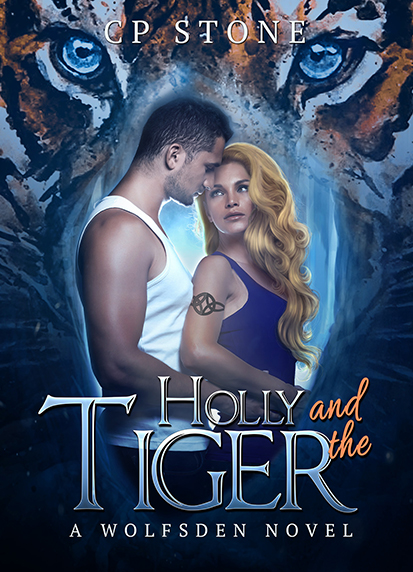 Holly and the Tiger by CP Stone

Holly’s cousin has gone missing and no one in the family seems to care but her. Quitting her job, she heads to the last place Sara was seen, Wolfsden. When she gets to the small New England town, she realizes things are not as they appear.
Long ago, Dylan wrote off finding a mate, until Holly walks into the bar. He doesn’t understand what it is about the shy woman, but he wants to find out. Deciding the best way to get to know her is to help her find Sara, the two of them set about trying to track down her missing cousin and to discover the secret of Holly’s family and her origins.
Get prepared for some steamy scenes with one hot shifter male.

What Inspired You to Write Your Book?
I've always had a love for paranormal romance and so decided to start a second line of books. Under CP Stone, I started with The Wolfsden Novels, the first being Holly and the Tiger. I'll be honest, my SO was a huge inspiration in writing this steamy book.

How Did You Come up With Your Characters?
For this first book in the series, I wanted to bring in a character who knew nothing about the world she was entering. Holly's past makes her skittish of relationships, but she's also an extremely loyal person as we find in her frantic search for her cousin. With Dylan, I wanted someone who has given up on love for entirely different reasons. He's lived a long life and he's lost all of his family. Finding Holly allows him to finally experience those things that he thought he'd never have.

Book Sample
"May I join you?"
The smooth masculine voice pulled her out of her reverie, and she looked up into the most amazing blue eyes she’d ever seen. So pale, they were almost gray with a black ring…no, was that indigo? She inhaled sharply through her slightly parted lips. It was the man she’d seen last night. In the same clothing, he was wearing last night.
And now he was hitting on her? No. It had to be something else. She let her eyes run over him a moment, and when she met his gaze again, he seemed heated. Desirous.
“Didn’t go home to change?”
Surprise lit his face. “What do you mean?”
“I saw you at The Hideout last night. In those clothes. What did you do? Just run out of that singer’s home first thing in the morning?”
A slow smile lit his features, and she almost gasped. It just wasn’t fair how good looking some men were. There was no way this man was hitting on her. His muscles had muscles, and in that tight tee, she could see how cut his abs were. She bet he had the best vee she would ever see. If she ever saw it. Which she would not because obviously, he wasn’t hitting on her.
“I didn’t go home with that singer.”
She shrugged, trying to hide the triumph she felt at that statement. “I’m sure you found another to strike your fancy.”
Grinning down at her, he said, “Oh, someone has struck my fancy.”
“So, do you need the ketchup or something?”
He chuckled. It was a full, rich sound she could get lost in if she let herself. But that wasn’t going to happen. Men always wanted one thing. And then they ran for the door.
“I don’t need ketchup. You’re alone, and I’m alone, and I thought we could at least keep one another company for breakfast.”