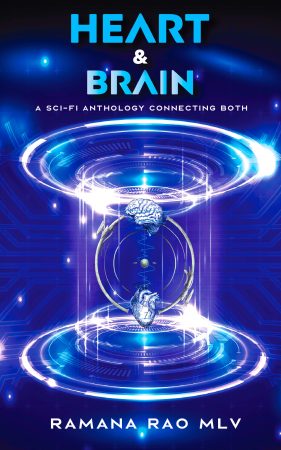 Targeted Age Group:: 15 and above

“Heart & Brain”, a sci-fi anthology that attempts to connect the both. The work is to depict signature thought in science fiction milieu. This anthology has its roots in reality while it does speculate to extrapolate it to a conceivable future and also has a good twist at the end of the story.
1. Random Factor: A woman aspiring to become a ‘natural’ mother in a futuristic society encounters a random factor that she hasn’t anticipated.

2. Sphere: An Artificial Intelligence psychologist aspiring to create a ‘natural’ AI lands himself in a strange situation that endangers his very own ‘sphere’.

3. Speck: An astronomy professor and scientist, who experienced the most exhilarating event and the most painful event of her life the same day, forty years ago, finds her ‘self’ in the most unexpected quarters.

4. Replay: An expert in Virtual Reality, who came to India to address a seminar with a hidden agenda, faces a situation that changes her life, forever.

5. Survival: a cosmic event that made a small physiological change in the human race results in a series of events that not only endangers human existence but also lays a path for the destiny of the human race – to be discovered and followed.

What Inspired You to Write Your Book?
They always say that heart has no logic and science has no emotion. My firm belief that both of them are mutually complementary, rather than mutually exclusive, has made me write this book. I sincerely tried to attribute emotion to logic and logic to emotion! I believe intuition is the invisible fibre that connects both.

How Did You Come up With Your Characters?
Well, they are as human as you are or as I am. The only difference is that they might have a different ‘canvas’ on which their lives are presented. The conflict between science and emotion is as old as that between human and nature.

For example, Suvidha, the protagonist of the story The Replay, is human because she has the conflict between her desire for revenge and her basic human nature. Usually, one should prevail at the expense of the other. What if both win and both lose at the same time? The battle field for the struggle is, of course, the arena of scientific innovation, making the age-old conflict a science fiction plot.

Book Excerpt/Sample
The following excerpt is from Random Factor.

Does an exception prove a rule? Nay! It starts a new one.

That was the idea that crossed Pratima’s mind when she looked down at the protuberance, the gentle swelling that so naturally flowed along her shapely curves, making her all the more beautiful. But, perhaps, the harmony between the contours made it a part of the beauty rather than an addition to it.

“Do you feel you can give birth without any risk to your life? I am afraid I have to ask this because there’s no longer a doctor available to attend to you.”

“Do you think you can nurture your baby in the right way? Teach them to grow into an ideal citizen?”

“Ms Pratima, how does it feel to carry a homo technicus in your womb?”

These are the questions the reporters will ask me in the virtual interview, she thought with a smile that gently parted her lips, defining her cuteness and satisfaction.
She felt a blissful pride as she bore the future homo technicus within; she smiled at the unique feeling. Its kick inside her womb felt like softness tickling her, only further enhancing her happiness.

From homo erectus to homo sapiens to homo economicus. And finally, to homo technicus. Taking millions of years to evolve. So long the journey had been. And she would perhaps mark a milestone in the eternal trek. That too, in just a few months!
With gentle fingers that exuded all the maternal love, no, the only maternal love in the world, she ‘touched’ the future. The bunch of cells, whose number had grown exponentially during the past months, had been taking the human shape and was very much alive, kicking and swimming in the ocean of purity and security. Those cells inside her were sucking the life out of her body, strangely revitalizing her – one of nature’s paradoxes as primal as humanity itself but now as rare as motherhood itself, unfortunately.

A new chapter in the history of humankind was to begin, all because of her and her baby! She enjoyed her individuality so solely that the external world and her own existence lost their significance.

If they were allowed to!

Some chapters of history might end before they began! The paradox of this so-called scientific advancement.

∞ ∞ ∞
The small beep intruded on her mooning existence, musical but still disturbing. To know who the intruder was, she wished her intention. Some centuries ago, the need for mechanical acts or commands had been replaced by thought processes that emitted signals to activate gadgets.

Before her eyes, right in the middle of the air, materialized a spherical screen of ionized air molecules, depicting the face of the person standing outside the door—automatic visual signal formulation and transmission.

“Ms Pratima, I’m here from the Department of Advance Scientific Research. I’m here to deliver the consignment.” The auditory circuits transmitted sound waves to her brain.
The sounds produced by his brain were so melodious!

How could it be otherwise? The genetic information that went into his body was explicitly engineered to suit his profession. She smiled to herself – a random factor had been the word of the long-forgotten past.

Was it really so?

She was living in the ‘thought-recognition’ era of hyper-computers. She nodded her agreement, activating the sensors. The door, perhaps the only lock in the world, unlocked smoothly.

The lock was also an oddity because it had been dead for almost a millennium. Human nature, engineered by advanced gene manipulation, was indeed a utopia, free of crime, aggression and violence and so, down went anti-social behavior, and the need for security systems and law-enforcement institutions. The eradication of anti-social behavior from the human gene pool had been so easy. It took only a few centuries. Just a matter of time!

The spherical screen dissolved into nothingness, and the door opened silently. Only when he entered the room did she understand that it was a humanoid, a substitute for manual human workers. If they have those things for mothers, it was not surprising to find them as courier people! She laughed at her foolish thoughts. Even a scientist like her could be fooled by the trickery of science – the creation of humanoids had become so perfect.

He – or is it an ‘it’? – walked in, carrying a huge box, and his eyes scanned the whole room for the best place to keep the consignment. Finally finding it, he moved there, opened the box, and started assembling the weird-looking machine skillfully. It took him less than five minutes.
The machine would run on power, but power cables and power points were nowhere around; rather, they were not needed. So instead, the sub-neutrino division had created an intelligent atmospheric layer of energy that would automatically identify power requirements and supply it cordlessly.
After completing his work, he gave her a goodbye smile, simply bowed, and made his exit. Politeness was programmed as a part of ‘its’ behaviour. But why humanoid? Why not the usual human delivery person? The questions should have popped up in her mind, but trust had been a genetically built-in characteristic.
As the humanoid left the room, the door closed and automatically ‘locked’. Her eyes landed on the machine. The most sophisticated and unique machine on Earth. Something that was exclusively designed for her. The Spartan room was such an odd background for such an advanced machine. Despite her unparalleled knowledge in the fields of her specialisation, she always liked modesty.
Indeed, the machine before her paralleled what was happening in her body.
And, like her, it was out of place and out of sync with everything worldly.
She was a tiny part of a machine on a conveyer belt of an assembly line to produce a gigantic machine. That was how she felt in the womb of the humanoid, the surrogate mother, and in the hands of another humanoid, another ‘surrogate’ parent to groom her.
I would not let that happen to anyone, let alone my child.

The thought made her nipples taut, and her womb stir with expectation. She was trying to be abnormal in this homo technicus-infected world by becoming a ‘natural’ mother to enjoy motherhood.

Reiterating that determination to herself, she ran her fingers from her curvy waist to the belly, following the smooth flow of her body that resulted in the bulge that housed the future homo technicus.

All this looked so surreal but enjoyable. The events that resulted in all of this came to her mind as vividly as the entertainment episodes on the spherical screen of ionized air molecules. Sometimes, living your present is reliving your past.

She never knew or heard of a mother telling a story to her child because there were no such mothers and no such children. There were no such needs and practices – all in the name of a scientific revolution.

Now, her consciousness began telling the riveting story to the future kid – the story of its origin.

Though a published author in late 80s, I have become an academic author by writing a GMAT Sentence Correction book for Pearson India. Now, I am trying my hand in sci-fi and literary fiction. Heart & Brain is a book close to my heart because it explores the scientific side of emotion as well as emotional side of science.

I really appreciate your constructive criticism to improve my craft and a positive one, if you feel like giving, a pat on my shoulder to write more.