You are here: Home / Fiction / Fighting for Eden by Jeff Stilwell 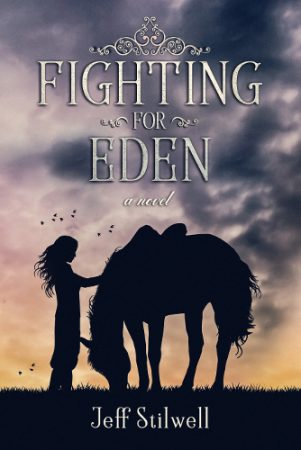 What happens when a fighter and a peacenik fall in love?

From the wind-swept horse country of the Yakima Valley to the airy academic halls of the University of Washington, three adventurers pursue their own Edens. One wants to be a hero, the second just wants to save her home, the third to make sense of it all.

Jake’s tragic death in the opening days of the Iraq War leaves his sister and best friend reeling.

Jessie finds herself all alone in the fight to save their family cattle ranch, even as the patriarchy of the Valley seeks to crush her.

Andrew’s questing mind is driven to the brink as he seeks to balance his pacifist convictions with his friend’s sacrifice.

Drawn together, this unlikely pair struggles to find meaning in their loss while they fight for their dreams.

Link To Fighting for Eden On Amazon Kindle Unlimited

What Inspired You to Write Your Book?
The Iraq War is a fascinating time for me because it proved the most divisive period in America since the Vietnam War. So many of the ideals used to justify the Iraq War – only to be rejected later as neo-conservative delusions – had been held in very high regard just two generations earlier during WWII and the reconstruction of Europe. This paradox of what role, if any, America should play in the world endures. To my reading of history, this great debate began during Thomas Jefferson’s administration and echoes down to the present day.
In that regard it was easy for me to write Jake’s character. While I have the same longing that Andrew has for a world without war, I know from personal experience living overseas that this world can be a very dangerous place. Thus, Jake, a soldier whose basic motivation is the Arthurian legends of Lancelot – a shining knight righting the wrongs of this world by defending those who cannot defend themselves – was equally enthralling.

How Did You Come up With Your Characters?
One of the two main characters, Andrew, was inspired by my personal search for meaning. Questions of ultimate meaning have been a burning issue with me since I went looking for God on my paper route when I was ten years old. As such, I’ve spent decades pondering – including through formal study – the major faith traditions that we as a people have developed over the last millennia. I focused on Andrew’s very real, very human struggles with these deeper thoughts as he grieves the loss of his best friend. Throughout the story, he spelunks through the majestic caverns of classical Buddhism, classical Taoism, mainstream Christianity and evangelical Christianity. His questing mind cannot help but find a certain delight in drawing contrasts and comparisons between these abundant traditions of spirituality.

Then, too, I never want to approach religion without a sense of humor. I hope the readers will be tickled by his equating sexual ecstasy with the murmurings of a medieval saint.

The other main character is Jessie. The inspiration for Jessie was my wife. Readers will note that I dedicate the novel to her for teaching me to ride bareback. My wife found growing up in a patriarchal, fundamentalist culture quite the challenge, as does Jessie, my character.
Jessie has no patience for the racism she experiences on a daily basis in the Valley. She has even less for the misogyny. When she was younger, she was able to brush them aside. However, when Jake is killed, her father collapses, and she’s left alone to save her family ranch from those who wish to scoop it up for pennies on the dollar, she finds that she can ignore those twin evils no longer.
At that point, just as her brother does, she digs deep and finds the warrior within to save everyone and everything she cares about.

Not content with his midwestern roots, he found ways on the cheap to explore the wider world including selling gummy bears in high school to visit the Alps of southern Germany. To pay for college, he worked a slime line as a head chopper in the clammy tundra of Alaska.

His thirst for adventure next took him to Asia where he studied the martial arts and Asian philosophy while exploring exotic locales such as the Himalayas and the lands of Lord Jim, even surviving a squall in the Gulf of Siam.

His flair for the dramatic led him to write and stage fifteen plays in and around the Seattle theatre scene. His works earned numerous laurels such as "an intense dramatic comedy you don't want to miss…an uninterrupted 90-minute power pack with something to say," for his One Tile Short and "a trip and a half in a little more than a hour and a half through an Alice-like wonderland and a half; ground-breaking in ways more than one," for his Teacup Tipsy.

Too restless, however, to merely sit behind a computer, he recently completed a solitary 750 mile hike from Stevens Pass in Western Washington to end, a Biblical sounding forty days later, at Old Faithful Geyser in Yellowstone National Park. Once upon a time, he even ran for Congress. If it's big, Stilwell has dreamt it, attempted it, or achieved it.

Link To Fighting for Eden On Amazon Kindle Unlimited