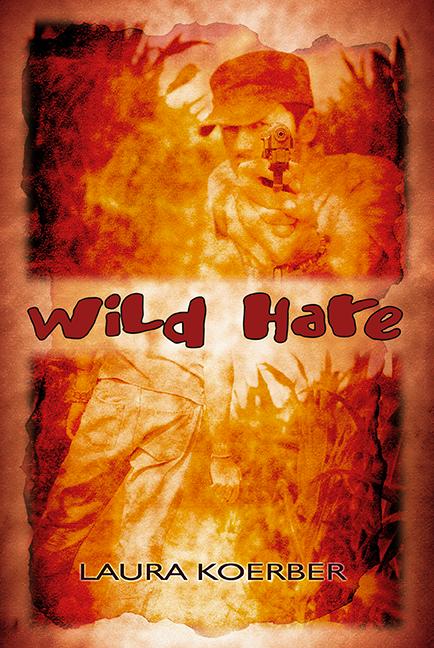 About Wild Hare by Laura Koerber

“The world is coming to an end, but my personal life is okay, I guess.”
That was my response to Arne’s “How’re ya?” greeting. I pushed the oil rags and cigarette butts off the seat of his old pickup truck and climbed in. Arne is used to sour comments from me, so he just threw the truck into gear, gunned the engine and smirked, “Someone’s got a bee up his butt this morning.”
I let a half mile of clear cut rumble past the window while I thought about my shitty mood. The low-hanging, pinkish-gray smoke in the sky was getting on my nerves in a quietly grinding way like bad music or the smell of diesel oil: the kind of irritation that puts you in a crappy mood without you noticing how you got there.
Back when I was a kid, I used to enjoy the ride to town because of the way the road wound around through a mosaic of wetlands and forest and lakes. There used to be lots of moose back then too: big, somber, stupid animals. I’d kind of admired the moose because they were so much better at parenting than my folks had ever been.
Mostly gone now: the forest, the marshes around the lakes, the moose.
The ugly fake forest outside the truck windows pissed me off as much as the smoke. Everything was reminding me how screwed we all were. Then Arne asked, “What’s the point of being a fairy if you can’t just wave a magic wand and get stuff done?” Yeah, I’m a fairy. No, not that kind. I’m half-human, half-forest spirit from the wild hare clan. There used to be lots of us, but most of the full fairies have either died or moved away with the death of the forest.
I got distracted by the radio: jingle-jangle music and a lady’s voice cheerfully singing something about “making our own happiness.” I thought she was talking about growing your own weed—which I do and, yeah, it makes me happy—but she went warbling on, and I realized that it was one of those government things like “President’s Hour” and “Fly the Flag” events. An announcer burst into speech, “As America prepares for ‘Make Your Own Happiness Month of 2032’, cities and towns everywhere are planning events to celebrate local business leaders who are creating wealth and employment through free enterprise…”
Arne cut her off. “She oughta give me something to be happy about,” he muttered around his cigarette. I just looked out the window. I hadn’t been a happy kid, and I’d been a stupid, angry young man, but that was because of family stuff: I got in trouble a lot because of being half-fairy with a schizophrenic father and a mother who’d been invisible most of the time. I went through a lot of hassle at school and later with jobs until I got good at conning people and became a successful small time criminal.
It was Monday, and we were driving into town so I could help Arne go shopping. Sort of shopping. Theft, of course, because I’m a trickster who lives by the cold of “Feed, fornicate, fight.” Mostly that just meant girl friends and the occasional altercation. I didn’t know, as I drove to town that day, that one bad thing would lead to another until I had to fight a whole new way to defend myself and my friends.