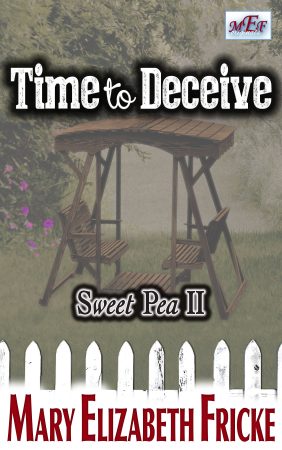 Getting married means you’re going to live happily ever after with your true love. Right? Unfortunately, for Johnie, the first thing she learns after marrying Phil is the necessity of deception as she conceals her love for Jake. Fate continues its cruel intervention when members of Johnie’s family meet untimely deaths and Jake returns to mourn the loss of his sister. Jake and Johnie reunite briefly, painfully, in determination to adopt their four-year-old nephew, B.J. Together, they tackle the on-going vengeance of Phil’s sister, Brenda. Johnie’s dream of happiness becomes a nightmare where Brenda cackles while Johnie boils naked in a cauldron of pea green soup. Because of Marsha’s return and steadfast loyalty, Johnie is able to endure even the most unthinkable.
Description of the Sweet Pea Trilogy: To one man she gave her virginity; to another she gave her heart. One, she would mourn. With the other, she would share life’s triumph and turmoil. With both she would endure times of love, and passion and complete happiness as well as times of despair, confusion, and sorrow. One day at a time—each day, building unforgettable memories.
Sweet Pea spans from the late 1960’s into 2009. Set in rural Missouri, it is a story for those who remember the profound cultural changes and historical events that took place in the later part of the 20th Century. It is especially written for those with rural backgrounds, who understand the continual mental and physical effort it takes to maintain a family farm (then and now). Sweet Pea is a nostalgic story of growing up; of forging lifelong friendships and loyalty within family that supports every life event, good or bad. It is a story of love that binds a man and a woman despite all odds. It is also a story of obsessive hatred and how such hatred destroys not only the innocent, but those who hate.