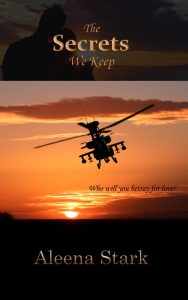 About The Secrets We Keep by Aleena Stark

Who will you betray for love?

Heartbroken and bleeding, Nora Brennan ran from her hometown vowing not to return. The last thing she expected to find was pain and sorrow, and a secret she’ll take to the grave. Long gone is the lovesick teenager she once was— when Dillan Larsen didn’t know she existed. Despite her instinct to run and not look back, destiny leads her to him, and the look in his eyes telling her to never leave him again.

Bitter? Hell yeah— he’s bitter! An entire deployment he spent writing to her, and she married someone else. Battle-hardened, and plagued with demons of his own, Dillan Larsen tumbles back into Nora’s path, a place he swore to avoid. He’s not the same man he was, and he won’t fall for her lies again.

Her well-crafted life unravels the moment he crashes through her door. He can’t understand the price she paid to reclaim her life, and the last thing she’ll do is tell him. No matter how badly she tries to hate him, she can’t escape the only man able to knock down her walls and wreak havoc on her shattered heart.
Can he find the truth before her secrets tear them apart?

Excerpt:
“I read your letter over and over again when I was away. Kept it in my cargo pocket each day until it turned yellow.”
She swallowed studying his scowling grimace, his nostrils flaring.
“Did you sleep with David the night you wrote it?”
Her mouth fell wide open. She closed the distance between them flinging her arm back and striking his cheek with her palm.
His head whipped to the side. A lightning fast hand snapped, capturing her wrist in the vise of his grip. He stared into her expressive face, her sharpened eyes shooting daggers his way.
He wasn’t sure what came over him, an energy rational thought would never condone, but he pulled her against his chest. A subtle, vanilla scent surrounded him, infiltrating his senses. Her plump lips hovered inches from his. Soft breath warmed his skin. Before he could stop what was happening, he captured her mouth in a punishing kiss.
She stiffened in his arms for a fraction of a second before her body responded. Warmth radiated from his chest, surrounding her in the masculine scent of his aftershave. Her lips parted to inhale a much needed breath, and he took advantage slipping his tongue inside. The moment his flesh swept across hers all coherent thought fled and she kissed him back.
He tasted like mint and sin, and she moaned against his lips moving her head to accept his deep intrusion. A fluttering sensation snaked along her side ending just under her breast. The iron grasp releasing her wrist turned feather soft sliding under her shirt to tease the lace of her bra.
As quickly as the kiss began, Dillan ended it. Pulling away, he broke all contact, leaving her swaying on her feet. The fire in his eyes blazed white hot, and with one last burning glance, he opened the front door.
“Is this what you did to him? Did you make him want you so badly he’d do anything you asked just to be with you?”