You are here: Home / Bargain Books Under $3 / Featured Book: The Rebel by J.R. Traas 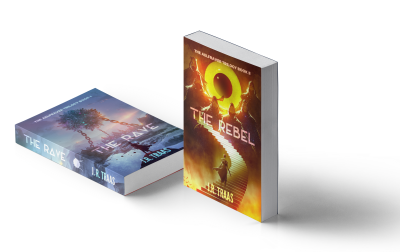 About Featured Book: The Rebel by J.R. Traas

An arcanepunk cyberfantasy set in J.R. Traas’s futuristic world of El, The Aelfraver Trilogy is a story about teenage rebellion—against the ruling elite and their gods.

GO HOME, ALINA
When Alina K’vich lost her parents, her grandfather Dimas gave her a home and a purpose. At The School, he trained her to become an Aelfraver—a hunter of arcane beasts, demons, and other anti-human entities. For ten years, they built a life together. Then, one night, in the middle of preparing dinner, Dimas vanished.

Now seventeen, and stuck with her grandfather’s debts, Alina resorts to illegal Raves in her rundown hometown. But these small-time contracts simply aren’t enough: The School lies in disrepair, the power’s shut off, and the bills remain insurmountable. In a last-ditch gamble, she signs up for a Rave whose massive reward could rewrite her entire future. However, she’s far from the only Aelfraver to answer the call of such an alluring bounty…

Out of options, Alina sinks the last of her money into a forged Raver’s license and a one-way ticket to New El, the floating Capital. There, an unnamable horror—her target—busies itself slaughtering the nobility in the dead of night, leaving no survivors and no witnesses. Protected only by her wits and spells, Alina must find a way to save New El, her School, and herself.

This book is in Kindle Unlimited!