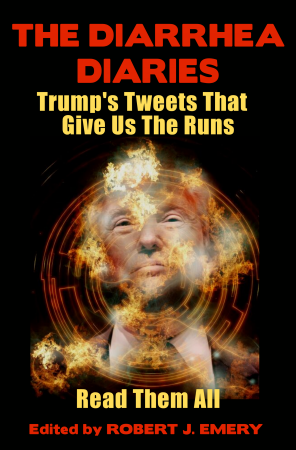 Take a peek into the mind of the current President of the United States!

Ever wondered what Donald J. Trump is thinking at any given moment? Ponder no more because his mind is an open book… literally. The Diarrhea Diaries is not a political statement by me, but by Mr. Trump himself. Think of the 34 chapters containing 480 carefully assembled tweets as Donald Trump’s greatest hits album. As he rages and rants about everything from global warming to impeachment, we get a true view into the deep-seated hostility he hurdles daily at his perceived enemies. Transcribed exactly as he posted them online, these tweets contain all of the original spelling errors, typos, and departures from the truth… exactly as Mr. Trump wrote them. To better enhance the authenticity, headers in this book were written using a newly created and downloadable font called LittleHands that replicates Mr. Trumps hand writing that appears to have been penned with a big Sharpie pen.

But don’t mistake this book as a hit-piece. There is nothing made-up in this compilation. All tweets are accurate down to the excessive capitalization he is known for. Lift the curtain and enjoy the 3-ring circus that is Donald Trump’s mind.