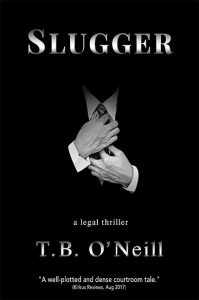 About Slugger by T.B. O’Neill

“Murder or the attempt thereof often occurs while others sleep.” And thus begins a story where danger insinuates itself into the course of ordinary lives. Rod Cavanaugh is a regular guy. Suited for his job as a criminal lawyer, he adores his girls and loves his scotch. When the bottom fell out of his marriage, he thought he had enough to deal with–mistakes of his own doing. but that was before he became the target of a client in a deadly game of cat and mouse. Innocence itself will be challenged by the mob and a killer who stalks and bides his time.

Reviews:
“A roman à clef based on a lawyer’s journal puts him in the cross hairs in this legal thriller…. (O’Neill) orchestrates his complicated, twisty plot toward an unexpected and satisfying conclusion…. A well-plotted and dense courtroom tale.” (Kirkus Reviews).
T.B. O’Neill’s Slugger is an incredibly complicated lawyer-based mystery that draws readers into the tangled plot and leaves them well-satisfied by the dramatic conclusion to the events….O’Neill masterfully weaves everything together …. a mystery that is never boring ….easy to get lost in…highly recommended that readers take their time and enjoy the ride.” (Portland Reviews, 2018, 4.5 stars)
“A deftly plotted novel that combines strong characters, crackling prose and a compelling, lived-in authenticity. But what really sets Slugger apart is its ability to educate as well as entertain. Reading this book, we’re schooled not only in the law’s arcane intricacies, but also the complex moral calculus that allows a defense attorney to serve his clients, presuming their innocence, while still being able to look himself in the mirror. Highly recommended. (Author Brian Marshall)