You are here: Home / Fiction / Fantasy / Featured Book: Revelation (Book 2 of the Crystals of Syre series) by Lindsey Cowherd 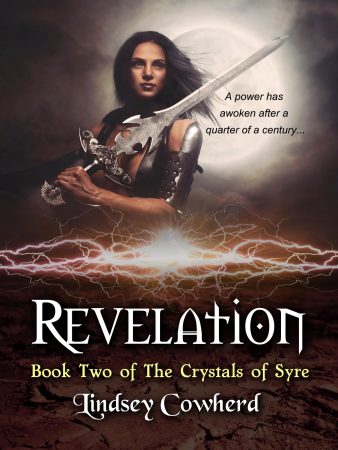 Presented is an epic tale of medieval fantasy and high magic that will sweep you into a story about eight kingdoms on the verge of war. Eight mythical stones, containing unfathomable magics, have been dormant for a decade. However, one has come back to life, making magic stir in the kingdoms of Syre once more…

In book one, Awakening, an old enemy has come back to the Kingdoms of Syre, putting into motion the Northern armies once again. Coming to the call for aid, fighters and dignitaries from other kingdoms have rushed to aid Staria and Sealand to halt this new advance; however, a feint has allowed some of the enemies to cut deeper into the Kingdoms of Syre.

Following their trail, a force is dispatched to find out where the maunstorz have gone. Their path takes them across the northern lands of Syre and deep into the ruined nation of Crystalynian. Upon touching the ancient ruins of the destroyed palace, Crystanian, an ancient power has been awoken. In a powerful burst of magic, the great stone Vauldin has released itself, shaking the foundations of Syre. The other Stones of Power have begun to awaken once more, heeding the obsidian’s call. The kingdoms of Syre have yet to win the war against the maunstorz invading their lands, but this avoked magic may be the beginning of change needed to turn the tides. Hope has come back to the people.

Download Revelation (Book 2 of the Crystals of Syre series)