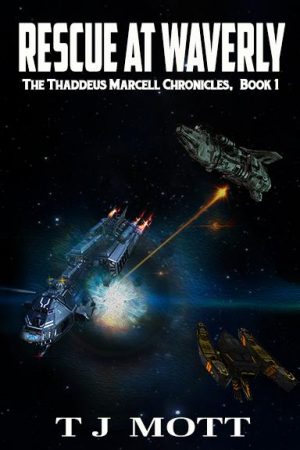 Earth is a lost, mythical planet, long considered to be an ancient legend. Those who search for proof of its existence are seen as eccentric treasure hunters or unmedicated lunatics with more money and ambition than common sense.

But one thing sets Thaddeus Marcell apart from the rest of the Earth-seekers: He was born and raised there. Abducted years ago, he’s spent most of his adult life trying to find his way back home.

Now, Thaddeus is a mercenary and information dealer, running an elite mercenary company with an extensive intelligence network in hopes that his men will stumble across evidence of Earth as they work contracts across the galaxy. He’s made some powerful enemies, and he still hasn’t found his missing homeworld.

But everything could change when his spies locate a woman he once personally knew from Earth–as cargo aboard a distant slave ship.

His mission is clear. Thaddeus must take his fastest starships on a rescue mission before his men lose track of her ship. It’s incredibly risky, for the distance is great, time is short, his enemies are many, and even some of his own Earth-doubting crew thinks he’s insane. But he might finally have a clue that could lead him back to Earth…if he survives…