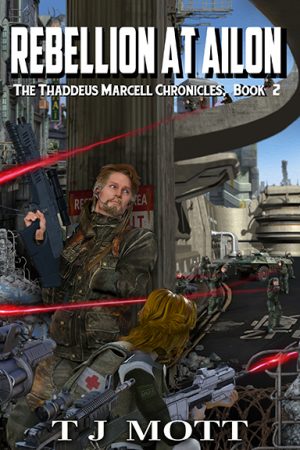 Book 2 of the Thaddeus Marcell Chronicles has just been released! In this entry, Thad takes a sabbatical from his mercenary organization. He travels incognito to a world called Ailon, which lost a war and became enslaved because of one of his pirate raids. There, he quietly volunteers with a medical charity, desiring to help people rather than fight while healing from his recent wounds and reflecting on his life and purpose.

But despite his intentions, he suddenly finds himself in the middle of a new rebellion as the people of Ailon decide to overthrow their oppressive regime. This new rebellion is naive, under-equipped, and under-trained, in desperate need of an experienced soldier such as Thad.

He has the skills to train them and help them win the war. But getting involved is incredibly risky. He’s there alone, living under a false name and cut off from his own Organization, and the pirate named Thaddeus Marcell is one of the most hated men in Ailonian history!