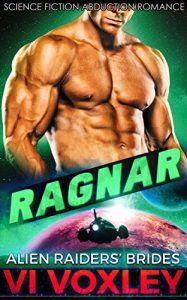 About Ragnar by Vi Voxley

Selena Gordon is done with running, or so she hoped. Fleeing from an abusive relationship is a reality she has to face, but when it comes to the possibility of giving another man control over her, she’s ready to stand her ground. No man, Nayanor or not, can make decisions for her ever again. Even if that man is ready to kill, destroy and conquer in the name of her happiness.

At least that’s what she thought. But then *he* came along…

Ragnar is a man of lacking patience and it shows in everything he does. Impatient to find his mate, impatient to get her home, impatient to continue his life with her, he wants everything now. It never occurred to him that the rapture of finding his mate could come with a bitter taste in his mouth with her seemingly endless need for freedom sets her at odds with him and his people. A woman has never successfully escaped from a Nayanor warlord. When tens of them try and Selena’s right in the middle of it all, Ragnar is faced with what impatience actually brings.

So what’s it going to be? Can Selena learn to stand her ground instead of run, and can Ragnar cultivate the patience he never had, or were they doomed from the start?

This Erotica book is available in these Formats: eBook