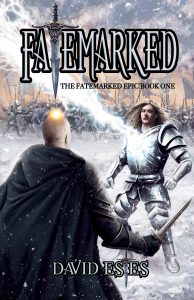 About Fatemarked by David Estes

In the spirit of fantasy epics like George R.R. Martin’s A Game of Thrones and Brandon Sanderson’s The Way of Kings, The Fatemarked Epic promises immaculate world building, an ancient prophecy, a mysterious source of magic, a diverse cast of characters, war, political intrigue, and romance.

The Hundred Years War has ravaged more than three generations of kings, queens, and citizens across the Four Kingdoms. Corrupt rulers dominate. Religious intolerance runs rampant. The cycle of vengeance continues to turn with the seasons.

An ancient prophecy by a legendary oracle has been long forgotten. The prophecy promises the return of peace to the Four Kingdoms on the backs of a chosen few, the fatemarked, individuals marked at birth and blessed with specific magical powers. One shall be the Kings’ Bane, and will bring death to the warmongering rulers, using fear to force peace; another shall be the Peacemaker, bestowed with the rare ability to heal. Opposite sides of the same coin, dark and light, death and life, the Kings’ Bane and the Peacemaker are responsible for the fate of an entire continent.

As they fight to achieve their destinies, adversity will hinder them in every realm: in the frozen north, assassination attempts and a brutal power struggle; in the holy west, a vicious queen and her self-righteous army of warriors; in the mysterious iron-clad forest of the east, revenge and glory rule the day; and in the southern empires of Calyp and Phanes, maturing dragons, slaves, and a civil war.

To truly fulfill the oracle’s prophecy of peace, both the Kings’ Bane and the Peacemaker, as well as the other fatemarked, will need to overcome those who seek to destroy everything in their pursuit for power.

The first book in an epic saga years in the making, Fatemarked will sweep you away to another land, another time, when magic and dragons, kings and queens, and courage and valor still meant something.