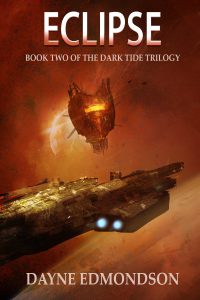 About Eclipse by Dayne Edmondson

The science fantasy adventure about aliens invading from beyond our galaxy continues in the second high-octane installment in the Dark Tide Trilogy.

Humanity has colonized thousands of planets on the far side of the Milky Way galaxy. They have formed interstellar governments and can travel “shadow space” to reach distant locations faster than light. Their mages can manipulate matter and energy to create or destroy. A tentative peace reigned in the galaxy…until the alien Krai’kesh came.

Veteran Federation navy captain Martin Rigsby and his fleet, feeling confident after their first engagement with the enemy forces, is in for a rude awakening as the full breadth of the Krai’kesh threat becomes known. Victory turns to ash in the mouths of the Federation’s greatest heroes as the Krai’kesh retaliate, leaving more death and destruction in their wake. Captain Rigsby, along with a marine lieutenant, pilot and intelligence officer, must race against time to stop the Krai’kesh before all humanity is eclipsed.

Join the adventure on the far side of the galaxy today!