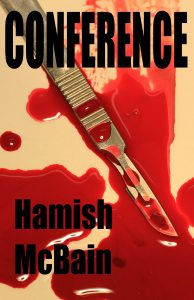 About Conference by Hamish McBain

Cameron Woods, a Scottish Veterinarian working in Australia, returns to his homeland to attend the World Small Animal Veterinary Conference in Edinburgh. He looks forward to catching up with old friends from university days. Damien Corrigan, a good friend for thirty years and owner of a renowned small animal veterinary practice in Liverpool, has committed suicide since Cameron’s last visit home.

When Cameron meets Damien’s wife Lydia, at the opening night of the conference, they discuss his friend’s premature death. He discovers a dark world. Damien had ludicrous money problems. He had been trying to cope with blackmail, the rape of his wife, and a daughter who had turned to prostitution to feed a drug habit.

Months before his death, Damien had sold his practice to “Noah’s Ark Veterinary Hospitals” – NAVHs- a corporate veterinary group owned by Harry Ainsley and Randal Hollingsworth. Both Harry and Randal graduated from vet school in the same year as Cameron and Damien. Harry Ainsley is now loved by the masses but hated by his peers. Randal has lost the plot and left his wife of twenty-six years , the beautiful Shona. He is now shacked up with the stunning, but icily cold, Belinda – NAVH’s financial manager. NAVHs are a major sponsor at the conference.

Cameron soon discovers that both Harry and Randal have abandoned any ethics or morals that they ever possessed and that the NAVHs empire is built on manipulation and blackmail.

Shona Hollingsworth is a beautiful spurned woman – keen to rekindle her friendship with Cameron – especially as he has left his wife back in Australia.

As Cameron delves into Damien Corrigan’s business dealings with NAVHs he is suddenly engulfed in a world of blackmail, drugs, sex and murder.

The pace is frenetic. The climax will leave you stunned.