You are here: Home / Nonfiction / Autobiographies, Biographies & Memoirs / Encounters with Streetwalkers and Escorts: In Praise of White Women by Nick Shaw 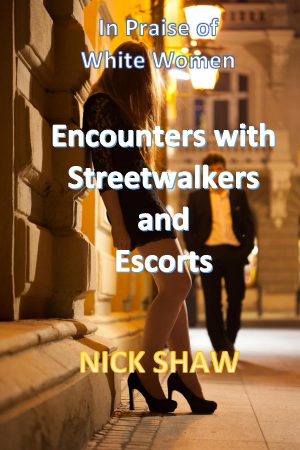 Nick, a fan of ladies of easy virtue, has written an account of his encounters with sex providers in Europe and USA over the decades. In the process, he has experienced the evolution of the sex industry in Germany from streetwalkers in the 1950’s to the present-day situation where escorts offer their services on on-line web sites. The book contains a collection of stories describing trysts with sex providers ranging from streetwalkers to classy escorts. It is a study in human profiles of the women practicing the oldest profession in the world.
WARNING 18+: This book contains material that may be considered offensive to some readers since it contains explicit sex scenes.

Link To Encounters with Streetwalkers and Escorts: In Praise of White Women On Amazon Kindle Unlimited

What Inspired You to Write Your Book?
I have been passionate about women and sex. This obsession has led me to pay for sex sessions with streetwalkers and escorts over the years. The aim of writing this book was to relive some of my memorable encounters and understand my own deepest desires. I also wanted to share my experiences with other like-minded people.

How Did You Come up With Your Characters?
My characters are based on real-life models of the streetwalkers and escorts that I had met over the years for paid sex encounters.

Link To Encounters with Streetwalkers and Escorts: In Praise of White Women On Amazon Kindle Unlimited