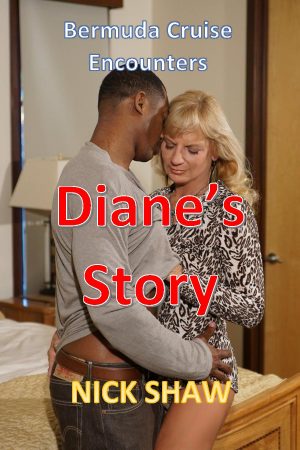 Diane Lowe, a fiftyish widow from Des Moines, reluctantly decides to go on a cruise to Bermuda a few weeks after the death of her husband.
Against her will, she is assigned to a dinner table of six, consisting of two couples and a bachelor. During the cruise, she discovers the sexual peccadilloes of her dinner companions.
Diane also finds herself attracted to Juan, her cabin attendant. Juan, a good-looking native of the Dominican Republic, is thirty years younger than Diane but he is equally attracted to the mature widow. Although aware that the cruise line has strict policies against cruise line crew members fraternizing with guests, Diane and Juan have clandestine sessions in her cabin and in various locations when the ship docks at King’s Wharf, Bermuda.
Diane and Juan try to keep their cruise romance under wraps but soon Kelly Armstrong, the ship’s security officer is keeping tabs on them.
Read the book to learn how this older woman – younger man inter-cultural romance plays out.

WARNING 18+: This book is not recommended for young readers

What Inspired You to Write Your Book?
I have always been fascinated by the older woman – younger man relationship theme with the added twist of an inter-cultural affair. On my last cruise, I did observe the special attention that a young cabin attendant was giving to a middle-aged female cruise guest and let my fantasy take over to write this story.

How Did You Come up With Your Characters?
My main protagonist, Diane Lowe, is a composite of two types of single women that I have encountered on cruises. There are the lonely spinster types who avoid other cruise guests and spend their time in the library reading books or solving crossword puzzles and there are the socializing types who come on cruises to get to know other people. In my story, I focus on the transition of Diane from a grieving widow to a woman who comes to grips with her latent sexuality.