You are here: Home / Buyer's Guides / Defending the Reaper by G.K. Brady 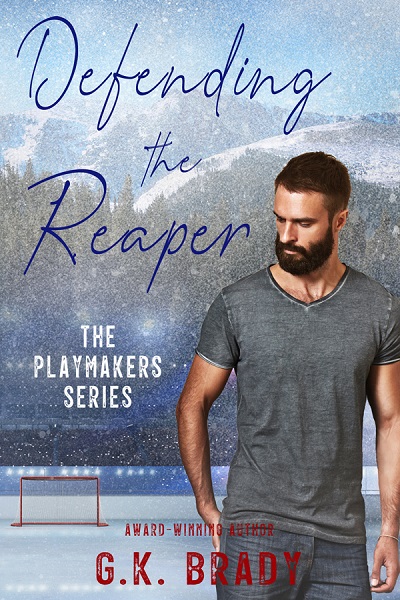 Defending the Reaper by G.K. Brady

Blizzard captain Dave Grimson’s life is as tangled as a wad of skate laces—and it’s a mess of his own making. Used to being in charge, “the Grim Reaper” has become the team leader in name only. Adding insult to injury, he finds himself dumped and single. Though he’s determined to piece his life back together, it’s time to leave his team and his city behind. What he needs is a trade and a fresh start. Dating? He’s leaving that behind too, until he collides with Ellie Hendricks. Literally.

Ellie is fighting to keep her landscaping company afloat before it gets buried under the mountain of debt her ex left behind. The last thing she needs is Dave Grimson crashing into her life. Besides, Dave is big and growly and so not her type—even if she did have time to give him a second look. Which she doesn’t.

Dave’s determined to make up for the damage his careless behavior has caused Ellie. What begins as a good intention, however, leads somewhere he never expected, and his well-guarded heart starts to show some cracks. Ellie’s unlike any woman he’s ever known. She’s unimpressed by his money, his celebrity, and him. All she wants from Dave is to have her van fixed. But he didn’t get where he is by backing away from challenges, and he’s not backing away from this one either—until he has to face-off against his demons.

As Dave lowers his defenses, Ellie catches a glimpse of something tender—and very compelling. But Dave has secrets he’s locked away, and she can’t solve them or his mixed signals. To understand Dave’s every unspoken word, she’s going to have to read between the lines.

Keeping it casual is the smart play, but Dave and Ellie’s mutual attraction won’t be denied, and it pulls them into the deep end … until those secrets come home to roost, threatening to crush the shaky trust they’ve built. Can they keep their heads above water, or will they be caught in a surge that drowns them both?

What Inspired You to Write Your Book?
A reader asked me to! The main character in this book is a secondary character in my previous hockey romance books, and apparently she liked him because she asked for a story about him.

How Did You Come up With Your Characters?
I wondered what happens to an athlete who’s basically a really good person but bends the rules and gets caught. What are his/her struggles? What does life look and feel like when he/she is no longer using performance-enhancing drugs? How does he/she come to terms with the consequences, and what, if anything, does he/she do to earn redemption? My main character has abused banned substances and has been caught at it. Part of his arc is to realize that whether he agrees with the rules or not, what he did is wrong. Once he’s had that epiphany, he must find a way to earn back his self-esteem and the respect of his teammates.