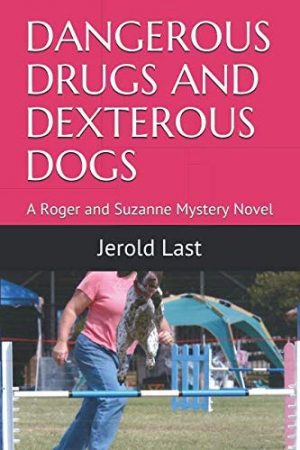 A late-night visitor tells Suzanne that something seems to be wrong with a research program that she’s involved in. He’s right. The CEO of a Southern California biopharmaceutical company disappears at sea under suspicious circumstances. Shortly afterwards, the Chief Scientific Officer from a competing company is brutally murdered. Both of the victims, and many of the suspects, were engaged in canine agility training. With Roger busy elsewhere, this case falls to Suzanne, who takes over the investigation and the responsibilities of the missing CEO. Fortunately, she has Romeo, a German shorthaired pointer, to establish her credibility in agility trials, and Roger’s staff of detectives to do the legwork in a major criminal investigation. The novel, available in e-book and paperback formats and free from Kindle Unlimited, can be read as a standalone mystery or a series entry.

What Inspired You to Write Your Book?
The cover photo is of our own Vinia at an AKC agility competition during her agility phase (she ended with a Novice A title), with my wife (and co-author) Elaine handling her. Elaine challenged me to write a novel in the Roger and Suzanne mystery series with Suzanne as the detective and Roger off scene in the background. She also suggested visiting the canine agility scene for the book's background. Here's the result. Like all the novels in this series all the language is clean and there isn't any explicit sex. With Suzanne in charge it's a little more cerebral and a good bit less physical than most of Roger's cases have been. I'm looking forward to the feedback via book reviews as to how well I succeeded in this story.

How Did You Come up With Your Characters?
This is the twentieth Roger and Suzanne mystery story I have published on Amazon Kindle (eleven novels, four novellas, and five short stories). Many of the recurring characters are part of the family and free to come and go as they please, and as needed, in the books. The single appearance characters in this novel are made up of bits and pieces of real people I know from the dog world and from my own long (and still ongoing) career as a scientist, mixed with whatever fictional attributes make them good characters for a mystery novel.

Book Excerpt/Sample
Beating frantically like a metronome set for allegro, Romeo’s tail was the only part of the dog indicating how eager he was to start running at Suzanne’s signal. She carefully adjusted her posture, body language, and shoulder orientation to guide her big German shorthaired pointer over the first obstacle on the Novice Agility course.

The AKC agility trial was being held in a local venue suitable for hosting a very large event, with nicely manicured, large flat green lawns accommodating several big agility rings so multiple levels of the trial could be run in parallel. Fountain Valley was less than a 15-minute drive on the 405 from Suzanne and Romeo’s new temporary home in Irvine. Today, a Saturday, she was entered into only her second real competition in an AKC-sanctioned trial, handling Romeo in the Novice A Class, the first level of AKC agility testing.

She had just walked the course to familiarize herself with the order of the obstacles and to plot her strategy for this course layout. It began with an easy jump, the bar set at 24 inches for a dog Romeo’s size, followed by a sharp left turn to the six weave poles, with an entry on the right.

The exit from the weave poles on the left fed easily into another jump, then a tunnel, exiting with a sharp right turn to line up the next jump. Suzanne visualized her optimal positioning at each of the course’s twelve obstacles to guide her dog through the twists and turns.

It was time! She signaled Romeo, who exploded into action after checking where Suzanne wanted him to go. He headed for the first jump, triggering the electronic timing mechanism at the starting line as he ran toward the first hurdle. As soon as Romeo began his run, Suzanne sprinted on a diagonal to align her body and shoulder set to signal weave poles next, enter from this side.

Her dog turned sharply into the correct approach, entered the line of flexible vertical poles cleanly, and zig-zagged from pole to pole left-right-left-right-left-right-exit to the left. So far, so good. Shoulders squared, her body set to signal that a new jump was the next obstacle, Suzanne steered the dog. As Romeo soared over the bar, she rotated her body and shoulders once again to guide him to the following obstacle. This was one of Romeo’s favorites, the entry to the tunnel.

Suzanne quickly moved out to align the exiting dog with yet another jump, which he cleared easily. He continued forward at full speed to clear the next jump a second or two later.

‘My fault,’ thought Suzanne, ‘I was too slow getting out there to steer him back toward the pause table. Taking that jump out of sequence is an automatic disqualification!’

Author Bio:
The author is a Professor of Pulmonary and Critical Care Medicine at the University of California's Medical School at Davis, near Sacramento in Northern California. Jerry, a two-time winner of The Indie Book of the Day Award, writes “tweener” mystery books (tough mystery stories that follow the cozy conventions of no graphic sex and no cussing), all published as e-books on Amazon Kindle with eight also published as paperback versions, that are fast moving and entertain the reader. Several of the books introduce the readers to South America, a region where he has lived and worked that is a long way from home for most English speakers. He and his wife Elaine lived previously in Salta, Argentina and Montevideo, Uruguay. Jerry selects the most interesting Latin American locations he found for Roger and Suzanne to visit while solving miscellaneous murders. Montevideo, Salta, Machu Picchu, Cuba, the Galapagos Islands, and Iguazu Falls are also characters in these books, and the novels portray these places as vivid and real. Jerry and Elaine breed prize-winning German shorthaired pointer dogs; Elaine also provides technical advice for Jerry’s dog-related novels like The Deadly Dog Show, Hunter Down, Roger and the Cancelled Czech, Abra Cadaver, and the current volume, as well as editing for all of the books.