You are here: Home / Buyer's Guides / Conducting the King by Julie Guardado 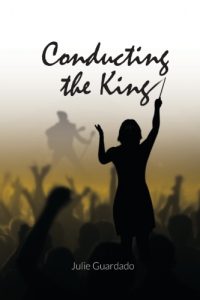 Conducting the King by Julie Guardado

Audrey Loveday dreams of becoming a symphonic conductor, but under the guidance of her father, she is closer to having a mental breakdown than leading an orchestra. Gut instinct and a bit of courage pushes her to break away in search of a female conductress to mentor her. Instead, she meets an elderly Southern man, an Elvis Tribute Artist, and a fiery backup singer, all of whom have dreams of their own and are counting on Audrey’s help to reach those dreams. Do they have The Four Ds of Success-desire, determination, discipline, and dedication-needed to compete in Memphis, Tennessee, with the top echelons of Elvis tribute artists? Thrown into the whirlwind of the Elvis world, Audrey learns about more than conducting: she learns about life, loss, and loyalty to the past, present, and what is to come. Dreams can come true but never in the way imagined.

What Inspired You to Write Your Book?
I received a Bachelor of Music degree back in 1994. One of my most vivid memories was of a female student conductor struggling to get the orchestra to pay attention to her. I felt her frustration, her humiliation, and her deep desire for respect while standing on that podium. Although I was at the University on scholarship, I was never at the top. A part of me always felt like that student conductor, frustrated. Perhaps my inspiration for writing "Conducting the King" is a combination of that student and me. It's difficult being an underdog, yet, in the long run it makes for a better story, if the underdog persists and succeeds. This book is dedicated to my father, who always rooted for the underdog. He was also a huge Elvis Presley fan. I'm guessing the Elvis theme must have been a seed planted in me long ago, awaiting for the perfect moment to sprout. What has inspired me to write this book, I hope in turn inspires the reader to go after their goal.

How Did You Come up With Your Characters?
The storyline of "Conducting the King" came to me while I was out on a midday walk. The characters, their names & personalities were instantly alive in my mind. So much so, I ran home and wrote out an outline for the whole book. I had two other books published, but this was my first fiction. This story included Elvis. As my brother said, "There are too many books on him already." That's true, but Elvis isn't the main character of the book. He only makes a two minute appearance in the book, but he is the driving force behind every character thereafter. I feel like I can't take credit for "coming up" with the characters. The majority of the book/characters wrote themselves, as they led me to places and people I never heard of. I didn't know about Mound Bayou, Mississippi, or The South, or even that much about Elvis. The strongest "voice in my head" was that of the character Caleb Freeman, an old southern man, a father figure. I listened to that inner voice and just trusted it/he would tell the story. Because of this, the story, takes place in present day, but has flashbacks to events in Caleb's life that shaped the man he is today. Although fiction, I wanted to make sure I paid Elvis, his legacy, The South, the men that work hard to impersonate him, and everyone who is going after their dream, justice. Once I started the book, I could not close my laptop until it was finished! I still refer to the characters as if they truly existed in real life. I feel that close to them.

For joining the author’s email/newsletter list you will get:
Interact with Author, ask questions, receive excerpts of future works!