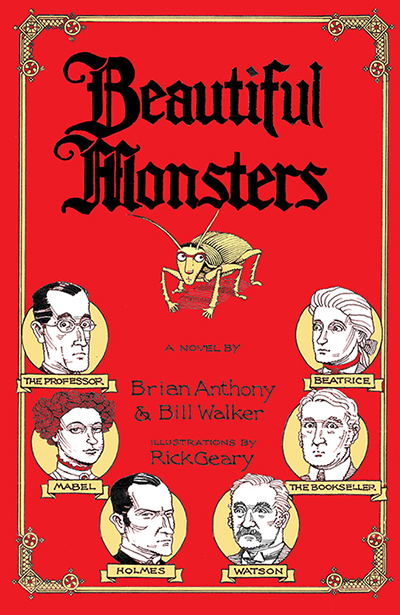 In London, in the year 1916, an ailing Sherlock Holmes is attended by his old friend and colleague Dr. John Watson. Sensing that time is short, Holmes relays one final, remarkable story to his biographer, that of Holmes’s own mentor, Professor Harry Nelson Beadle.

In 1874 thirty-year-old Professor Beadle, laureate at Cambridge University with degrees in biology, anthropology, and sociology, is widely respected by faculty and students alike. But the Professor’s obsession with his theories concerning the cross-evolution of humans and insects–beautiful monsters—proves to be his undoing. Based on a spurious piece of evidence, the Professor spends years researching and writing a tome, which is eventually published to some acclaim. But the price is high; his obsession costs the Professor his position at the University, his wife, and his young daughter.

Jim Beam, an American, a former student, and an unwitting participant in the deceit, belatedly reveals the terrible truth to the Professor: that the empirical evidence was fake! Thus, begins a forty-year odyssey in which Professor Beadle, aided and abetted by his former student, searches the world for the thousand printed copies of his book, Beautiful Monsters—buying, begging, and sometimes stealing them, with the goal of eventually destroying every last copy.

Early in their journey, Beam meets a lovely young woman, Mabel, and the couple wed. Mabel is initially sympathetic to the Professor’s plight, but as the obsession with tracking down the book grows and takes hold of her husband, their marriage begins to suffer. The impending tragedy is completely lost on Beam, but not on the Professor, who sees an eerie similarity to his own failed marriage. Could the book—with its terrible invocation of insect-men—be cursed?

In his quest to erase “this published monument to my own stupidity,” the Professor and Beam cross paths with an odd assortment of characters, including Thomas Edison, a giant, George Méliès, and on the final leg of their bizarre journey, Sherlock Holmes himself

What Inspired You to Write Your Book?
“Beautiful Monsters” was inspired by a three hundred year-old German legend. In the early 1700s a college professor, Dr. Johann Beringer, wrote a scientific tome which was based on fake fossils planted by his enemies to taint his research. From this a number of wild and bizarre myths evolved, and based on some of these my co-author, Bill Walker, and I weaved our tale.

How Did You Come up With Your Characters?
Some were nonfictional characters and their personalities were drawn from historical references. The newly created fictional characters–specifically the professor and his friends, a bookseller and his wife–were not so much deliberately created, they were discovered through writing and re-writing.

Book Sample
Thomas Alva Edison resided in Menlo Park, located in Middlesex County, New Jersey, in the United States. He purchased a large parcel of land there in 1875 and proceeded to build his main laboratory building, in addition to structures that served varying functions, including a carpenter’s shop and a blacksmith shed.