You are here: Home / Fiction / Romance / Another Chance on Love by CL Rowell 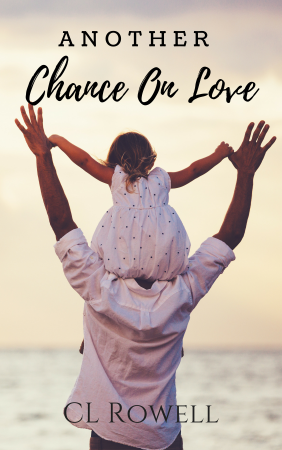 Can true love happen twice in one lifetime?  If you like a love story that’ll make you laugh and cry and root for the hero, a story of first love, lost love and second chances at love, it’s all right here!
Brandon thought he had his life planned out. After high school and college were behind them he was going to marry the girl of his dreams.  Unfortunately, life – and love – don’t always go as planned.  When tragedy strikes before they can make their dreams a reality, Brandon  isn’t sure he wants to let anyone that close again.
He’s sure her memory, and their child, is all he’ll want or need. So when he
starts feeling sparks of attraction for his daughter’s godmother, he isn’t sure how to
react. Stung once by life’s fickle whims, he doesn’t want to
risk his heart again – especially when he has an innocent child to consider, too.  But fate – and a hard headed little girl – have other plans…and they think Brittney  and Brandon are a perfect fit.  Can Brandon find room in his wounded heart for Brittney? Can he be persuaded to take another chance on love?

Link To Another Chance on Love On Amazon Kindle Unlimited

What Inspired You to Write Your Book?
Death happens, and it's really hard when it happens to the one you thought you'd be with forever – especially if children are involved. Not many love stories cover that topic, or of finding love again, and trusting enough to give your heart again after such a loss. I wanted to try to show the sorrow of loss and the silver lining of finding love again.

How Did You Come up With Your Characters?
When the story came to me, the characters moved from the ether into the front of my imagination. That's how it happens for me…either I'll come up with an idea and the characters come forward or the characters start shouting their stories until I capture it in a story.

Author Bio:
I am a southern girl, born and raised in crawfish country. I love to write romance – and read science fiction and fantasy, horror, romance and erotic romance. I'm a bit of a poet, but mostly when I'm feeling emotional. My friends tend to come to me when they need poems. I've been all over the continental US. My fave state? Oregon, because it has it all – beaches, ocean, mountains, caves, valleys, desert. I've been to Canada. I've driven an 18 wheeler…I'm 5'1", lol. I wanted to be a race car driver, but my first love is reading/telling stories. Why? Because between the covers of a book, you can go anywhere, be anything, and do whatever you like…all in the span of a few hours.

Link To Another Chance on Love On Amazon Kindle Unlimited