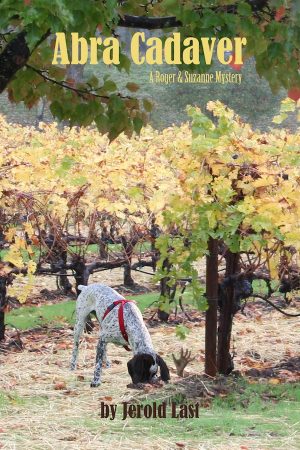 Proving you can bury a body but you can’t hide it, German shorthaired pointer Juliet solves a complicated murder case in the popular mystery series featuring P.I. Roger Bowman and his scientist wife Suzanne. Why did the client’s husband, a winery owner in a small town in Northern California’s Central Valley, disappear just a couple of days after his wedding? The answer launches another suspenseful case that will entertain mystery fans, dog lovers, and wine aficionados alike. As in all the Roger and Suzanne novels the language is clean, the sex is offstage, and the books can be read in any order so readers can begin the series with this novel. Available in e-book and paperback formats. Free from KU.

What Inspired You to Write Your Book?
We own and breed German shorthaired pointers, a breed known for their amazing noses in the field. The idea of transposing the character traits of one of our actual dogs onto a fictitious cadaver dog was appealing. Much of the appeal was the opportunity to explore a classical theme of one of my favorite mystery authors, Ross MacDonald—the sins of the fathers are visited upon the children—in a contemporary mystery thriller. I liked the roots of the story being buried in the past, both literally and figuratively.

How Did You Come up With Your Characters?
The book is part of a series, although all of the books are written as fully standalone novels. The characters include several I have used before, plus several new ones to fit the plot. Juliet, the dog, is very much modeled after our own Jolie.

Author Bio:
The author is a Professor of Pulmonary and Critical Care Medicine at the University of California's Medical School at Davis, near Sacramento in Northern California. Jerry, a two-time winner of The Indie Book of the Day Award, writes “tweener” mystery books (tough mystery stories that follow the cozy conventions of no graphic sex and no cussing), all published as e-books on Amazon Kindle with six also published as paperback versions, that are fast moving and entertain the reader. Several of the books introduce the readers to South America, a region where he has lived and worked that is a long way from home for most English speakers. He and his wife Elaine lived previously in Salta, Argentina and Montevideo, Uruguay. Jerry selects the most interesting Latin American locations he found for Roger and Suzanne to visit while solving miscellaneous murders. Montevideo, Salta, Machu Picchu, Cuba, the Galapagos Islands, and Iguazu Falls are also characters in these books, and the novels portray these places as vivid and real. Jerry and Elaine breed prize-winning German shorthaired pointer dogs; Elaine also provides technical advice for Jerry’s dog-related novels like The Deadly Dog Show, Hunter Down, and Abra Cadaver, as well as editing for all of the books.