You are here: Home / Buyer's Guides / A Stand-in for Dying by Rick Moskovitz 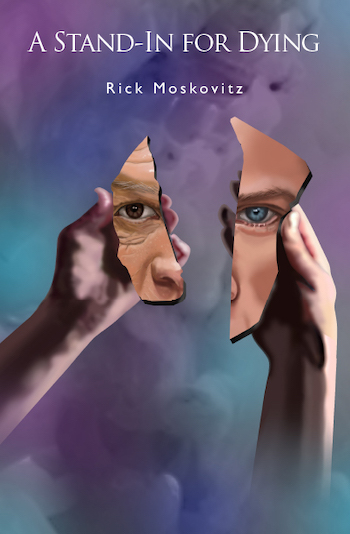 A Stand-in for Dying by Rick Moskovitz

In a near future world on the brink of environmental catastrophe, a mysterious woman brokers an anonymous pact between two men for the older man Ray to inhabit the younger man Marcus’s body when he dies in exchange for a fortune and access to vast knowledge. The consequences for both men evolve over the ensuing years. When Ray finds a way to exchange identities while still alive, both men struggle to navigate their new lives and relationships while under attack by Ganymede, the architect of the consciousness swapping technology, and the Tribe of 23, a human supremacist organization that has targeted Marcus because of his and his wife’s advocacy for AIs to have equal rights with carbon based humans.

Their moral and emotional development is informed by the resourceful women who love them, one an accomplished journalist, the other a teacher who guides AIs to perceive and feel human emotions.

What Inspired You to Write Your Book?
As I watch the current generation of young adults assume their leadership roles in our culture, I see once again the youthful illusion of immortality and invincibility, this time with a twist. The Technological Singularity is close upon us and with it the prospect, at least in the eyes of the young, that life everlasting is within their grasp. And I wonder, given the temptation to extend life indefinitely, how the choices will be made and at what price the reality of immortality might come.

How Did You Come up With Your Characters?
As a psychiatrist, I have witnessed the vast array of human aspirations, quirks, and frailties and have become a keen observer of my own. I have also observed the connection between formative early experiences and trauma and the peculiarities of personality. My characters struggle to overcome the stumbling blocks of their pasts while addressing the challenges presented by the choices they’ve made as adults. And their dance with conflict is inspired by mine.

Book Sample
Lena was never happier than when she was working. She loved meeting and interviewing creative people, then lovingly crafting verbal portraits of what made them beautiful to her. Now that Ray no longer depended upon her presence to feel secure, she was free to resume her work and develop her craft.

“I have a new assignment, Ray,” she said one day upon returning home, “and I want you to come with me this time.”

Ray was intrigued. Lena had never before invited him for a glimpse of her personal world. This was new territory in their relationship.

“She’s an artist,” Lena replied, “no, more than just an artist. She has some very special talents. For one thing, she’s a synesthetic.”

“You mean her senses bleed together?”

“Yes. She visualizes sounds and she hears what she sees. Even the textures of things she touches transform into music and pictures. She’s an extraordinary talent. I’d like you to meet her.”

When Ray and Lena arrived at the artist’s studio the next afternoon, it was like walking into a fantasy world. They were completely immersed in color and sound, which seemed to blend so synchronously that it was impossible to know where one ended and the other began. Even the boundaries of their bodies melted into the surrounding space.

The artist led them outside into a lush garden where their senses were sufficiently freed to permit a dialogue.

“Delighted to meet you,” said Haley, extending her hand and making eye contact. Her hand was soft and warm, but her handshake was firm and assertive.

Haley was pleasing to the eye, but not beautiful in the conventional sense. She looked in her mid-thirties. Her skin was clear and smooth, her hair somewhere between sandy and brown, pulled tightly back in a ponytail and secured by a plastic clip. She was dressed plainly in a white, men’s button-down shirt, at least a size too big and hanging over khaki twill pants that looked as though they’d been washed a few too many times. Both garments, speckled with multi-colored paints, hid a body that was trim and healthy, but as nondescript as her dated clothes. Her whole appearance seemed incongruous for someone so attuned to creating beauty.

Haley read the question in Ray’s eyes. “You’ll have to forgive my appearance,” she said, passing a hand down the front of her body and smiling. “I try not to upstage my work.”

Ray listened intently as Lena conducted her interview. He hadn’t heard her work since they’d first met and he’d been her subject. He was as fascinated to hear how her technique had evolved as to learn about the woman they’d come to see.

Haley had long been aware of her special gift, but she didn’t always know that everyone else experienced the world differently. When she’d created her first painting, everyone around her knew right away that she’d be capable of transforming the world of art with a unique vision. When she’d composed her first sonata, they realized that her talent was multi-layered and her potential limitless. She was given every possible tool to nurture that talent.

When the interview was done, Haley led them back into her home for a more detailed tour of its contents. This time, the first thing Ray noticed went beyond the sights and sounds. As he walked through the rooms, he became attuned to their aromas, which he inhaled deeply, arousing a medley of emotions evoked by his sense of smell. The aromas flowed and shifted with the visual images and the music, reproducing with remarkable fidelity the artist’s synesthetic perceptions.

Across one wall was an expanse of shimmering butter yellow canvas, accompanied by the subtle hum of a sweltering afternoon, and the smell of fresh sweat mixed with honeysuckle blossoms. Standing before it, Ray felt a deep sense of longing for something that felt like a lost memory, but had never been part of his actual youth. Crossing the threshold into another room, he found himself looking at swirls of black, accompanied by a deep base cadence, and the smell of charred flesh. Ray felt a flash of the horror that he’d experienced on the day of the fire, but it vanished as soon as he’d moved on to the next image. None of the emotions evoked by the pieces lingered beyond the physical boundaries of the work.

Even in the vast database of Ray’s MELD chip, he’d never experienced anything with the evocative power of Haley Sellica’s art. He was grateful to Lena for allowing him to accompany her to the interview and understood why she’d chosen to do so.

“She’s amazing,” Ray said when they were on their way home. “The genius of a savant without any of the deficits. Warm, witty, emotionally complete.”

“I told you it’d be worth coming to meet her. It’s something you have to see for yourself to believe.”

“She’s a perfect example of why SPUDs will never be like us,” Ray said.

“Huh? That was out of left field, Ray. What the hell do you mean by that?”

“Just look at what she’s done. Creating art requires an appreciation of the senses. And art that speaks to people like hers does requires an understanding of human emotions and experience. No machine could ever produce that kind of work.”

‘Perhaps you’re right, Ray,” Lena said. “Would you like to come back with me for the followup interview?”

Lena’s first interview had focused on the artist’s work. When they next returned to her studio, Lena’s focus shifted to her personal life.

“Tell me,” Lena asked, “who is important in your life.”

“Why, you are for this moment…and your husband. You have my undivided attention for as long as you remain in my home.”

Lena was thrown by this odd response and rephrased her query.  “Is there anyone more permanent in your life? Have you ever been in love?”

“Oh, no,” answered Haley. “I’m completely devoted to my work…and of course to my Creator.”

“Religious? No, not really. I’m not even sure what that means.”

“It means belief in a higher power, a supreme being that created us and the world.”

“So you believe you were created, too?” answered Haley, wrinkling her brow. “What is your Creator’s name?”

“Mine’s Gideon,” said Haley without looking up. “He’s only made a few of us.”

Ray and Lena looked at each other, each searching the other for clarity. Ray spoke next.

“How many of you are there?” he asked.

“Five altogether. I have two sisters and two brothers. I’m the youngest.”

“So Gideon is a person and you’re…”

“An artificial intelligence. What you people would call a SPUD,” replied Haley. “Didn’t you know? How many humans can do what I do?”

Lena grinned. Ray’s logic had been turned on its head. The reddening of his face and neck betrayed that he’d come to the same conclusion.

On the way home, Lena couldn’t help but rub it in. “So SPUDs can’t be as creative as people. Do you still believe that?”

“OK, Lena. I get it,” Ray said. “I’m going to have to rethink a lot of what I believe. Be patient with me. I’m still a work in progress.” He flashed her a grin. She smiled back. “So what are you planning to write?”

“Her story is remarkable even if she weren’t a SPUD,” answered Lena. “She’s not secretive about it, but I think that people will appreciate the magic more if they think she’s human. It’s like she said. She doesn’t want to upstage her work. Neither do I.”