You are here: Home / Buyer's Guides / A British Heiress in America by Becky Lower 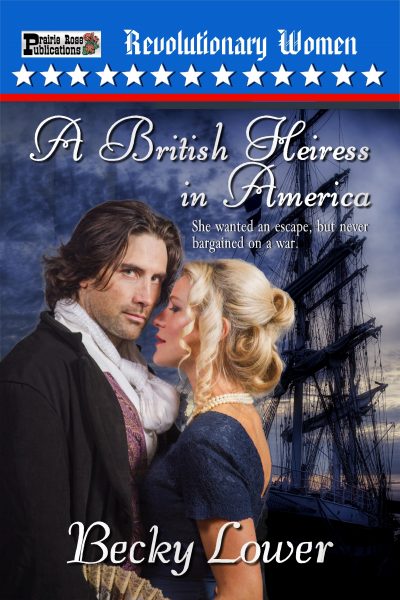 A British Heiress in America by Becky Lower

Her father plans for her to marry stodgy…old…and rich.

What’s a beautiful British heiress to do if she’s going to escape a life of passionless marriage? With her father planning to sell her off to the highest bidder in order to support his own lavish lifestyle, Pippa knows there’s only one thing she can do to save herself.

Lady Philippa dons boys’ clothing and stows away on a London ship destined for the American colonies and a new life. One full of hope, freedom, and the chance to finally live up to her feisty nickname among the rough sailors—‘Pip.’

But instead of finding independence on the high seas, Pippa is plunged deep into the dangerous world of espionage–and the arms of handsome Daniel Simmons, a merchant sailor for the British—who is also an American Revolutionary spy!

Torn between allegiance to her home country and the passion she’s always been searching for, Pippa now faces an unexpected threat—and it may cost Pippa and Daniel the very freedom—and love—they’ve both been searching for.

If they manage to survive the very heart of the beginnings of the Revolutionary War, can the daring spy find love in the arms of A BRITISH HEIRESS IN AMERICA?

What Inspired You to Write Your Book?
I've always loved American history, but not the way it's taught in school. I'd much rather view it through the lens of the people who lived through it. So I decided to write about it that way. The Revolutionary War is full of stories of ordinary people who rise to the occasion and become a force to be reckoned with. In light of the times we're now living through, it's especially important for people to know that ordinary citizens can become extraordinary.

How Did You Come up With Your Characters?
Pippa, my heroine, began as a secondary character in a different book. I decided I liked her better than the lead character, so I lifted her from her minor status and wrote a book about her, shoving what had been the lead character under the proverbial bed. I needed to find a hero worthy of her, so I invented the ship captain who is a widower with a young child who is a spy for the patriots.

Book Sample
Off the Coast of England, 1775

The minute the ship began to move out of the docks, Pippa’s courage faltered, as if it took a swan dive over the railing and began dog paddling toward the pilings. The shores of her home country faded in the distance, along with her ability to change her course. She desperately wanted a cheroot but couldn’t light up and give herself away even if she had one. Instead, she curled up between the water barrels and closed her eyes, hoping her stomach would settle if she didn’t witness the rocking of the ship. She let the up and down motion lull her into a stupor.
“Blimey! What ‘ave we here?” One of the crew of the Gladys Maria jostled a barrel away, exposing Pippa’s hiding place. She fell backward, hitting her head on the deck, the sun blinding her. She winced, at both the crack to her head, and at the harsh sunlight. One hand shielded her eyes, the other cradled the back of her head, leaving her body exposed.
A swift kick in Pippa’s ribs made her yelp in pain. She curled into a ball, but meaty hands grabbed at her and forced her to her feet. She doubled over and grabbed her midsection, retching.
“Well, iffen it ain’t a little stowaway.” The deckhand laughed as he grabbed the back of Pippa’s shirt and tugged her upright. “Cap’n will not be pleased to see the likes of you.”
Pippa swallowed her bile and struggled as the man grabbed her trousers as well as the nape of her shirt and half-carried her below deck. “I can walk by meself, guv’ner.” She intentionally lowered her voice, but still it sounded more like a socialite than a boy to her ears. Could she pull this off? Her limbs were shaking so badly she wasn’t at all certain she could walk by herself.
He dropped her to the floor once they got below deck but still kept a hand at the nape of her shirt, bunching the fabric in his large hand. “So, walk then, laddie.” He shoved her forward, and she stumbled, but kept her balance.
He’d called her a lad. She blew out a breath. At least one man bought her disguise.
“Where to?” As if she had a say in the matter.
He grabbed her arm and hurried their pace. “To the captain’s quarters. That’s where we take all the stowaways.”
She trembled but wrenched her arm away from his grasp. “How many of us are there?”
“Yer the first one I’ve come across this trip, but there’ve been others.” She glanced at the deckhand. His grizzly face was bearded, his sneer revealed a shiny gold tooth, and his matted hair fell to his shoulders. He made her insides quake. Definitely, he was the most fearful person she’d ever come into contact with. “’Tis a pity we’re so far out to sea already. We coulda just tossed you back into the harbor a couple hours ago.”
Pippa couldn’t stop the full body tremor that pulsed through her. She didn’t know how to swim. Young ladies of the Ton didn’t partake in such foolishness. She took a deep breath and faced forward. Not being able to swim was the least of her concerns right now. She had an appointment with the captain, and her fate awaited.
The gnarly deckhand stopped in front of a door and knocked once.
“Enter.”
He opened the door and shoved Pippa inside before he followed.
“I was just about to crack open one of them water barrels when I found this mongrel, hiding in the middle.” He clutched her arm again.
As if she could have escaped this small room, with the deckhand standing in front of the door and the captain staring at her as if she were a bug he wished to squash. She held her breath.
“Nice work, Ben. Leave the boy here. I’ll decide what to do with him.” The captain rounded his desk and continued to stare at her. She stared back. English society had thus far limited her to dancing in ballrooms and charming various titled gentlemen, and she was ill-equipped to deal with the likes of the rugged-looking captain. His face was tanned, his body muscled, and altogether, he was the most handsome man she’d ever met. His jawline could slice paper, his blue eyes matched the sea.
Pippa expelled a breath, feeling the walls of the cabin close in. She’d never been alone in a room with a man before. Of course, her first experience would have to be with the most handsome man ever, and she in disguise as a boy. A disguise she needed to keep up for the duration of the voyage. In the ballroom, members of the Ton applauded her using her feminine wiles on a man, but in this case, those tools would not work. She couldn’t charm her way out of her situation.