You are here: Home / Fiction / Fantasy / Wrong Side of a Workingman by Justin DiPego 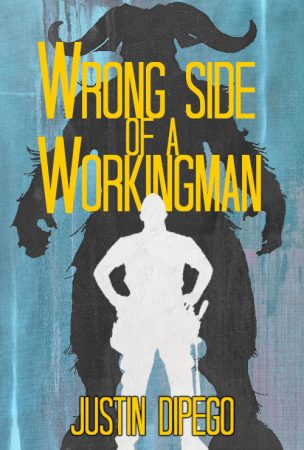 WRONG SIDE OF A WORKINGMAN – an Illustrated, Adult Urban Fantasy
Alex Cides straps on his tool belt one morning, only to find his wife is gone, his daughters fear him, he’s lost his job and a mysterious curse has thrown him out of balance with the universe. Ten impossible tasks in LA’s mythical underbelly stand between setting things right, or losing everything. Literally.

Link To Wrong Side of a Workingman On Amazon Kindle Unlimited

What Inspired You to Write Your Book?
I was inspired to tell this story on several levels. I wanted to explore and share the glimpses into the many worlds that exist across the Southland of Los Angeles and the trials of a blue-collar tradesman working throughout the city, while also delving into my own experience with chronic pain.

How Did You Come up With Your Characters?
Looking for a way to incorporate my themes of exploring the city, exposing the life of a workingman and drilling into the pain issue, I knew I didn't want to write a treatise, or a literal memoir, but an exciting and entertaining story — So I hit on the fantasy framework of setting the 12 labors of Hercules in modern day Los Angeles, and loosely extrapolated the characters from there.

Book Excerpt/Sample
CHAPTER 3
Miles away, colorfully painted three and four-story brick buildings lined the block of a very old L.A. neighborhood. Murals decorated almost every appropriate wall, some of them by artists who were once famous. Graffiti marred a few of them, but not as many as you think. Los Angeles was a city before Spain lost its hold on Mexico, and the forty-four founders of the pueblo brought their Mestizo, Mulatto, Indio, Negro, Criollo and Peninsularo language and names to the territory. So whatever region you’re in now, from Los Feliz to San Pedro, the streets and neighborhoods may have Spanish names, though you should pronounce them like a local, not a Spaniard.
In this particular neighborhood, not only were the street signs in Spanish, but the store signs too. The ones that weren’t were in Korean. Only the No Parking signs were in English.
As they always had, people walked here. A stooped old woman with her bags in a wheeled basket trundled the broken sidewalk, navigating the other pedestrians. Some were headed to work, some to shop, some merely loitered with nowhere to go. There were sleepers on the concrete here and there, and a small number of hunters, moving only their eyes, looking for a fix or for something they could steel with the smallest amount of effort.
Barely taller than the handle on her cart, she took in every passerby, assessing how badly and how likely they might hurt her. Still, even among the most rangy and hungry-eyed loafers, she felt unthreatened. She had buried two husbands, one of them literally, and seen a war ebb and flow around her. When the black, beater pickup with ladders in the back, jammed to a halt and squeezed into in a space too small for it, she didn’t even flinch. But when the driver’s door screeched like an owl, and the serious faced man who stepped down turned out to be white, she quickened her pace.
The man slammed the door behind him. The old woman was surprised to see him walk with determination into the small shop with the red, white and blue sign painted on the window, “BOTANICA.”

Author Bio:
Justin is an author, screenwriter, horseman and artist with a passion for storytelling across multiple genres and media. He lives in a 100 year old haunted house in South LA and is slowly fixing it up (but not exorcising it) with his wife and their dog.

Justin has written such films as Ghost of New Orleans (starring Terrence Howard, Lake Bell and Josh Lucas) and Tempting Fate (starring Tate Donovan and Ming-Na Wen). He wrote, produced, directed and starred in the award-winning independent horror feature, #1915House. Development deals include Touchstone Pictures and MGM. His debut novel, exploring the mean streets of LA’s skid row, Seven o’Clock Man, launched to five-star reviews. His second novel, an illustrated urban fantasy, Wrong Side of a Workingman is out now.