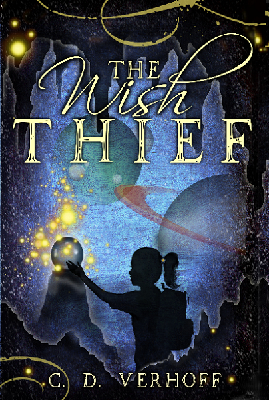 A girl on a quest for a precious stone finds more than she ever imagined. Perfect for fans of A Wrinkle In Time and The Chronicles of Narnia.

Thirteen-year-old Glory Alley is a rock collector and caving enthusiast. After the death of her mother, her unemployed father can’t stop drinking. The older siblings bully the younger ones without mercy. Life at home is rough. Having to endure the endless taunts of classmates, school isn’t much better.

Thinking money will solve her overwhelming problems, she sets off to find a priceless gem in the forbidden caverns of Queen’s Mesa. Just as the prize appears within reach, otherworldly beings arrive to take it away, not realizing they have met their match in Glory.

A battle of wits versus magic ensues, unraveling the order of the universe. Only the girl who started the trouble can return things back to normal. Considering her miserable situation back at home, surely there’s a better option than ‘normal’, but can she find it before time runs out?

Link To The Wish Thief On Amazon Kindle Unlimited

What Inspired You to Write Your Book?
This wasn’t my first novel and it isn’t my most recent. So I can say with some authority that something unusual happened as I began the creative process that hasn’t repeated itself. An hour or two into the manuscript, the words seemed to flow into me from a source outside of myself. Over the course of two days, I was a woman obsessed. A story has never come alive so easily.

I went two days without sleeping or eating until the story had a beginning, middle and end. The book has been expounded upon and revised a million times since then, but the core remains the same. It’s a book about a young person who discovers a ‘magic’ greater than herself, greater than the world, greater than the cosmos itself.

How Did You Come up With Your Characters?
I really wanted to write a story about a downtrodden girl from a rough family, but I thought a boy would be more popular (think, Harry Potter). In the first drafts the protagonist was a young teen named Dustin. His beloved youngest sibling was a girl named Gracie. During the revision process, my heart kept telling me to be true to my original vision. Now a girl named Glory Alley is at the center of the story. Her youngest sibling is a boy.

Well aware that she was violating every rule of spelunking by going in alone, Glory slipped into the crack anyway. The bumpy walls were high in places. The top opened like a valley. The space narrowed quickly. She sucked in her pudge, shifted her bag to the side, and squeezed through hip first. The unexpected view on the other side took her breath away.
A natural cathedral ten times bigger than the school gymnasium stood before her in dizzying grandeur. Thousands of years of water droplets, mixing with calcite from the stones, formed cream-colored stalactite and stalagmite pillars. They thrust upwards and downwards, twisting and turning like a maze of delicate ivory. Its arched ceiling, crusted with sparkles, appeared as a starry night straight out of a fairy tale. Mirrored crystals magnified the beam from her flashlight a hundred-fold, explaining the rainbow effect. Glory felt like she had burrowed out of the sewer into a wonderland.
“Holy schmoly,” she whispered.
A forest of stalagmites stood like melting white candles frozen in time. Glory walked past them until she came to a vast dome that rose up and up. Below, the floor gleamed like polished marble. A lone, twisty stalagmite spiraled from its center, and a black rock the size of her head, perfectly round and as smooth as ice, balanced upon it. In their natural state, stones rarely formed with such symmetry and shine, deepening its mystery. The walls of the cavern slanted inward as if bowing to the rock at the center. Heat rushed to her clammy cheeks. Glory’s heart fluttered. She had found the most perfect rock in the universe, and it was just sitting there, begging to be taken.
For a minute, she stared, drooling in its presence, feeling her spirit being drawn toward the stone ahead of her tiptoeing feet. The unexpected sound of sniffing prickled the hairs on the back of her neck. She stopped to listen, a single question forming in her head. What if Grandpa’s tales about the mesa are true? Glory quickly dismissed the thought. But what if other cavers were in the mesa and tried to grab the stone first?
She sprinted over the wide, empty floor, sliding to a stop in front of it. Toes strained as her hand reached out for the most beautiful rock ever. Trembling, Glory’s fingertips made contact. A warm pulse came from the stone. She tried to recoil but was too late. It exploded into millions of miniscule stars of light.
“I AM FOREVER!” a voice thundered through the cavern, blowing Glory off her feet.
She hit the ground hard, while the stars penetrated her skin like bullets, sizzling as they were quickly absorbed. In a daze, Glory pushed herself up into a seated position. The rock sat on its stalagmite pedestal as if nothing had happened. But something had happened—was happening.

Author Bio:
I grew up in Indiana and currently live in rural Ohio. My resume includes retail, elementary school teacher, medical lab processor, finance and more. Squeezed in there somewhere was marriage and two awesome children.

Back up a few years (okay, a lot of years), to my senior year of high school. I was working part-time in a legal office. On a slow week when the boss was on vacation, I started my first fantasy novel. Wow, I thought, who knew writing could be so much fun? The book was terrible, but an aspiring novelist was born. Unfortunately, getting published didn’t seem like a realistic goal. Being hopelessly pragmatic, I filed away the dream and worked toward degrees in business and education.

However, the stories in my head refused to die and I couldn’t stop thinking about them. Thanks to emerging eBook technology, I have found the means to share my imagination with the world. Old stories have been refined and new ones keep coming. I will read nearly any genre, but I write fantasy and science fiction.

Link To The Wish Thief On Amazon Kindle Unlimited