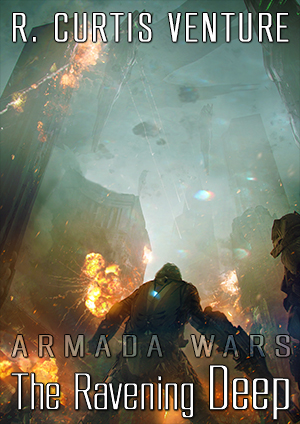 Panic grips the Many Worlds.

Across the Empire, dozens of colonies have already stopped responding. Mighty dreadships are sighted with alarming frequency, and chilling reports trickle back from the outer star systems every single day. The Falling has been visited upon many planets already, the rumours say. The Falling cannot be stopped.

Even while struggling to understand the enemy’s tactics and objectives, operative Elm Caden will do anything he can to protect Earth’s territories. But it may already be too late. For across the Many Worlds brews an unconscious, contagious fear: something horrific watches from the Deep Shadows, and it is about to make its presence felt.

Still reeling from a personal and professional loss, Caden is one of a mere handful of people who truly grasp the threat posed to humanity. Now, with his remaining allies pulling in different directions and his resources stretched to their limits, he must discover the true nature and intentions of the mysterious enemy known as Voice. If he should fail, there can be only one outcome:

Advisory: this is the third book in a five book story.

With its signature realism and heart-pounding action sequences, The Ravening Deep takes the characters established in the first two books and throws them head-first into a war which could devastate humanity.

Link To The Ravening Deep On Amazon Kindle Unlimited

What Inspired You to Write Your Book?
The basis of the Armada Wars universe was originally written as the back story for a game project which never came to fruition. To build a realistic and uncompromising universe, I took everything I love about science fiction, films, and books, and threw out the parts which either make no sense or regularly get used as shortcuts. Then I added planning time. Lots and lots and lots of planning time.

How Did You Come up With Your Characters?
The characters who populate the Armadaverse are written to be — for all intents and purposes — real. I started with the roles that would be needed in the story, added individual traits which might make the execution of those roles interesting, then built personal histories around those skeletons.

Author Bio:
R. Curtis Venture was born in the United Kingdom in 1978. A graduate of Applied Biology, he has previously worked in entertainment and hospitality, business development, and intelligence analysis. His first great passion was for science fiction, both in books and on the screen, and he spent his childhood years imagining far-off places.

He is currently employed full-time in the legal sector, and somehow also finds time to write.

You can find R. Curtis Venture on both Facebook and Twitter, where he welcomes interaction with readers and encourages feedback. To see what he's reading these days, follow him on Goodreads.

Link To The Ravening Deep On Amazon Kindle Unlimited