You are here: Home / Bargain Books Under $3 / The Mistrusting Maid and the Prairie Preacher by Jenny Creek Tanner 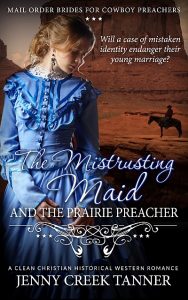 Caroline Stephens was headstrong and determined. . .

At least those were the two words her father had used to describe her, but when it came to men she’d learned to hold back.

˃˃˃ Working as a maid had been the last thing she wanted to do for the rest of her life. . .

She’d always fancied getting married like her sister Edna had, but she hadn’t been as lucky in love. After their father had passed away the previous year things had been difficult but that was all changing now as she approached the town where she’d meet the man she’d agreed to marry. It would take them time to ease into life together, that was expected.
But how long would that take? And what if he wasn’t the same man as she’d come to know in the letters he’d sent?

˃˃˃ It had taken Leon Shaw a year of working all sorts of odd jobs to establish his ministry. . .

Now, though, he was reaping the rewards. The men seemed to understand the stories he shared about Christ and were giving their lives to the Lord.
He’d considered all aspects of life on the prairie, and the one thing he lacked was a wife with which to share his life. Exchanging letters back and forth with Caroline had been a blessing. He’d started to feel connected to her in a way he hadn’t expected.

Was it possible to fall in love with someone through their words? Because if it was possible, he would think he was in love with Miss Caroline Stephens.

But will a case of mistaken identity cause Caroline to lose the trust in Leon, and threaten to destroy their young marriage?

Will Leon be able to discover the source of Caroline’s doubt, and regain her trust as her husband, and as a man of God?

Will a surprise from Leon’s past help him heal, and help Caroline understand her doubts?

And will God bless Caroline and Leon in a way neither expected?

Find out the answers by getting your copy of “Mistrusting Maid and the Prairie Preacher,” the third book in Jenny Creek Tanner’s Mail Order Brides For Cowboy Preachers Series today!

What Inspired You to Write Your Book?
I love the old west, and the stories of the women that took the risk of traveling to meet their future husbands, often sight-unseen. And, I wanted to conclude my series of books about prairie preachers and their mail order brides.

How Did You Come up With Your Characters?
I wanted this story's female main character to have her optimism about her new life turn into doubt when she learned the man she had just married was actually a wanted criminal. And I wanted that tension to mount as she is conflicted about who she thinks he is and how she sees him behave as her husband.

Book Sample
Caroline's hands shook as she fumbled the warrant out of her pocket. She'd taken the horse, loaded with her items from the store, and made her way to a large tree at the edge of town. It was still in sight of the general store, which made her feel safe and vulnerable all at once. Safe because she trusted Mr. Miller and vulnerable because anyone could see what she was doing. She hoped they would think she'd gotten a letter—not a wanted poster about her husband's arrest.

And that was what it was. As she looked down at it, she saw the paper did indeed hold a picture of Leon's face sketched in dark charcoal lines with the name "Leo Shaw" printed beneath it. He was wanted for a bank robbery several months ago.

But Leon was a prairie preacher, a pastor. He couldn't have been involved in a bank robbery. Could he?

She licked dry lips and paced back and forth some more. This wasn't at all what she'd expected. Had anything in the way Leon had acted or anything he'd said alluded to the fact that he was a criminal?

She thought back to the day before. He had arrived wearing a dust cloth covering half his face but it could be explained by his ride into town. But the fact that he made his camp at the outskirts of town was also suspicious now that she thought about it. Then again, he said Ray was working in the town and he was out on the prairie with the men. Was it because he didn't want to be recognized in town?

And the man yesterday—it came back to her now—he had looked like he recognized Leon and was afraid of him. Was it because of his reputation?

Now Caroline felt sick with worry. Her husband was a wanted man!

No. She told herself to calm down. That still remained to be seen. There could be some type of miscommunication. Maybe they thought they saw someone who looked like Leon. His name wasn't Leo after all. Though Leo and Leon were very similar. And the fact the last name was Shaw…It all fit together too well.

Steeling herself for the ride back, she managed to get on her horse and head back to the camp. Along the way she asked the Lord what to do, but no answer came to her. She had married the man for goodness’ sake.

Another thought surfaced. How much was the reward for turning him in?

Her pulse hammered and she felt heaviness in her stomach—she couldn't turn her husband in for reward money. Could she?

Caroline had come out West for a new life, something Leon had promised her, but if he had lied to her about being a criminal it was only right—only fair—that she be compensated and released from her obligatory marriage to him. Wasn't it?

Shame coursed through her. He had been nothing but kind to her, if not a little awkward, and here she was thinking about how much money she could get for turning in the man she had pledged to honor in sickness and in heath. But if he had lied to her, didn't it make their vows a lie as well?

Their camp came into view and she urged the horse on, the pace still slow but manageable. She still had time to think through all aspects of this problem, but the real question was whether she should ask him out right about being involved in a bank robbery, or if she could hope he would tell her.

Which would be better though, to have him freely admit it without remorse or to have him realize he'd been found out? Either scenario didn't sound promising. If he did feel remorse it would mean turning himself in. If the robbery was months ago, wouldn't he have done that?

Sighing, she managed to get the saddle off the horse, though it almost toppled her, and she began cleaning up the camp as best she could. At this point anything that would take her mind off what she would say to her husband would be a good thing.

Otherwise she would have to figure out a way to get out of marriage to a criminal.

For joining the author’s email/newsletter list you will get:
Jenny Creek Tanner's 4-Book Starter Library