You are here: Home / Fiction / Mystery/Suspense / The Deadly Dog Show by Jerold Last 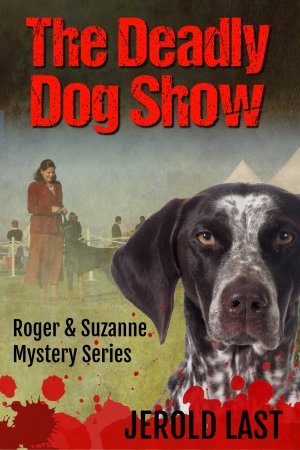 In The Deadly Dog Show, a suspenseful thriller set in the hyper-competitive world of canine conformation shows, Roger and Suzanne have to identify Suzanne’s mysterious stalker while they solve the murders of dog show judges. Includes some good dog training tips. Breeders and dog show enthusiasts, mystery fans, whodunit lovers, dog lovers, and the many readers who’ve enjoyed previous books in this series have rewarded the novel with critical praise. Can be enjoyed either as a series entry or a standalone novel.

Link To The Deadly Dog Show On Amazon Kindle Unlimited

What Inspired You to Write Your Book?
My wife, Elaine. She has been breeding and showing German Shorthaired Pointers for as long as I’ve known her. She lobbied long and hard for a book in this series set in her world of dog shows, and volunteered to serve as my technical adviser on this novel.

How Did You Come up With Your Characters?
The biggest advantage of writing a series is we already have the major characters available for use. Initially, Roger began as a modernized composite of all the classic private eyes from the mysteries I’ve always enjoyed reading, and Suzanne, at least professionally, is my alter ego.

Author Bio:
The author is a Professor of Pulmonary and Critical Care Medicine at the University of California’s Medical School at Davis, near Sacramento in Northern California. Jerry writes “tweener” mystery books (tough and dark mystery stories that follow the cozy conventions of no graphic sex and no cussing) that are fast moving and entertain the reader, while introducing the readers to a region where he has lived and worked that is a long way from home for most English speakers. He and his wife lived previously in Salta, Argentina and Montevideo, Uruguay for several months each. Jerry selected the most interesting South American locations he found for Roger and Suzanne to visit while solving miscellaneous murders. Montevideo, Salta, Machu Picchu, the Galapagos Islands, and Iguazu Falls are also characters in these books, and the novels portray these places as vivid and real. Jerry and his wife Elaine breed prize-winning German Shorthaired Pointer dogs; Elaine also provides technical advice for Jerry’s novels like The Deadly Dog Show and editing for all of the books.

Link To The Deadly Dog Show On Amazon Kindle Unlimited