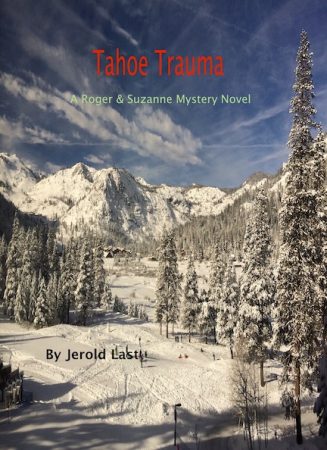 Suzanne finds a dead body on a ski slope at a Lake Tahoe resort. There seem to be a lot of people in California and Nevada who wanted to see the victim dead. Which one killed him? From the lush forests, well-groomed ski slopes, and scenic grandeur of the Tahoe wilderness to the glitzy casinos of Reno and the sumptuous excesses of the Hollywood party scene, Roger follows a twisted trail of treachery to a killer who just might have committed the perfect murder. This suspenseful thriller, which can be enjoyed as a standalone novel, is available in e-book or paperback formats.

What Inspired You to Write Your Book?
I know the setting well as we live an hour's drive from Lake Tahoe. I wanted to use this very special place as a backdrop for a thriller. All of my books are designed to be read as standalone mysteries, but the series features recurring characters who deserved a good vacation. And I wanted to do an updated contemporary treatment of the classic noir California private eye novel as a series entry.

How Did You Come up With Your Characters?
Most of my characters are not new, but are veterans of previous books in the series. Roger and Suzanne, my main detectives, are in all of the books. The other people in the book have characteristics borrowed from real individuals I know or have worked with, and are adapted as needed for their roles in the story. A few of the minor characters just popped into my head as I went along, so we might say they introduced themselves to the story as needed.

Book Excerpt/Sample
In the spring the top layers of snow on the well-groomed and well-marked ski slopes were machine made, covering the many times melted and refrozen natural snow known affectionately to the locals and visiting skiers as “Sierra Cement”. To each side of the groomed slope were “out of bounds” areas where the snowpack was irregular, with occasional rocks, trees, and bushes marring the natural snowpack and creating a safety hazard. Advanced skiers often liked to ski on real snow in these out of bounds areas, rather than the manmade variety on the groomed slopes, in areas where the natural snowpack out of bounds was adequate to cover all of the obstacles.

About a third of the way down the carefully groomed slope they were skiing on, Shasta spotted a likely looking stretch of real snow that had been protected from melting by the shade cast by a thick stand of pine trees further beyond the out of bounds markers. She turned gracefully to the right heading in the general direction of the clump of trees beyond the out of bounds marker, calling out to Suzanne to follow. They both slowed down to enjoy the feeling of real powder snow under their skis until they got a good look at what was waiting for them in the out of bounds area further down the slope.

As they neared the trees, well beyond the groomed slope all of the other skiers had descended, Suzanne saw what appeared to be a downed skier, half-buried in the snow lying motionless. From the extensive damage to the back of his head, it was obvious the victim was dead. The two women pulled up several feet from the downed skier, not wanting to disturb what might be a crime scene.

Suzanne, like Shasta no stranger to finding dead bodies, pulled out her cell phone and dialed the emergency number she had programmed into the instrument before beginning skiing today. “I want to report a dead body off one of the ski trails at Squaw Valley,” she told the emergency response operator who answered.

Author Bio:
The author writes “tweener” mystery books (tough mystery stories that follow the cozy conventions of no graphic sex and no cussing), all published as e-books on Amazon Kindle, with ten currently also published as paperback versions. They are fast moving and designed to entertain the reader. Several of the earlier books in the series introduce the readers to Latin America, a region where he has lived and worked that is a long way from home for most English speakers. Jerry selects the most interesting places that he has lived in or visited for Roger and Suzanne to solve miscellaneous murders. Jerry and his wife Elaine (who edits all of the books) breed, show, and hunt test prize-winning German shorthaired pointer dogs.