You are here: Home / Fiction / Science Fiction / Steal from the Devil by R. Curtis Venture 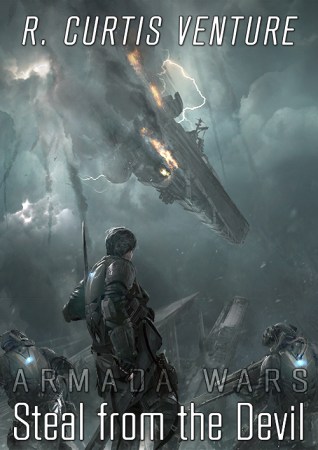 Humanity has traveled to the stars and established an empire spanning hundreds of worlds. In a galaxy bustling with intelligent life this feat did not come easily, and old enemies have always been a constant threat to the security of mankind. But now something is different. A virtually unknown outpost has recently gone dark, and nobody knows why.

When Elm Caden is sent to investigate the loss of communication, he has no idea what he is about to discover. The signs though are all around him: somewhere — out there in the endless dark — something hostile is stirring.

The first novel from the Armada Wars universe, “Steal from the Devil” is part mystery, part suspense, and all military science fiction. Blending elements from different genres, it painlessly introduces a whole new universe of people, places, politics, and combat.

Link To Steal from the Devil On Amazon Kindle Unlimited

What Inspired You to Write Your Book?
The basis of the Armada Wars universe was originally written as the back story for a game project which never came to fruition. To build a realistic and uncompromising universe, I took everything I love about science fiction, films, and books, and threw out the parts which either make no sense or regularly get used as shortcuts. Then I added planning time. Lots and lots and lots of planning time.

How Did You Come up With Your Characters?
The characters who populate the Armadaverse are written to be — for all intents and purposes — real. I started with the roles that would be needed in the story, added individual traits which might make the execution of those roles interesting, then built personal histories around those skeletons.

Author Bio:
R. Curtis Venture was born in the United Kingdom in 1978. A graduate of Applied Biology, he has previously worked in entertainment and hospitality, business development, and intelligence analysis. His first great passion was for science fiction, both in books and on the screen, and he spent his childhood years swooping about on a BMX making “peow peow” noises.

He is currently employed full-time in the legal sector, and he therefore makes time to write by completely ignoring his friends, family, and social obligations, and avoiding pointless activities such as sleep.

You can find R. Curtis Venture on both Facebook and Twitter, where he welcomes interaction with readers and encourages feedback. To see what he’s reading these days, find him on Shelfari and Goodreads.

Link To Steal from the Devil On Amazon Kindle Unlimited